The Supreme Court’s looming decision on whether a citizenship question will be included on the 2020 census could complicate the effort to get a complete count in California, despite added funding and staffing designed to prevent another undercount. 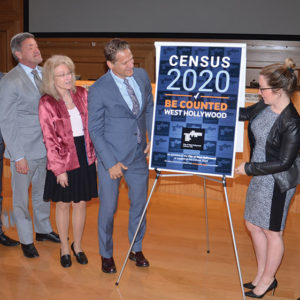 “We do have a population that is immigrant, and in some cases, some of our residents may be undocumented,” said Hernan Molina, a government affairs liaison for the city of West Hollywood, adding that they could be less inclined to respond due to fear of deportation.

Cities and unincorporated areas throughout L.A. County face the same concern. On April 23, during oral arguments about whether the question will be allowed, the four U.S. Supreme Court justices appointed by Democratic presidents worried about a possible undercount nationwide. Justice Sonia Sotomayor said the odds are “about 100 percent that people will answer less” if the citizenship question is included.

But, in a likely precursor to the court’s final ruling, the five Republican-appointed justices indicated that the commerce secretary has the right to add the citizenship question.

Messaging from local organizations working to ensure a thorough count, including West Hollywood’s Be Counted West Hollywood campaign and the city of Los Angeles’ Census 2020 Initiative, will emphasize that the Census Bureau reports data in the aggregate, and keeps individual responses confidential. The bureau is prohibited by law from sharing individual census responses with law enforcement agencies including the FBI, ICE and local police.

Gov. Gavin Newsom’s proposed budget includes an additional $50 million for outreach, which would bring the total state funding to $140.3 million. Los Angeles City Council President Herb Wesson introduced a resolution to support the additional state funding. California’s population was undercounted in the 1990, 2000 and 2010 censuses, according to the state’s Legislative Analyst’s Office. Census data is used in part to allocate federal funding and apportion seats in the House of Representatives. California’s number of seats in the House increased from 45 to 53 since 1990, and the Legislative Analyst’s Office projects that number will remain the same if the count is accurate.

President Donald Trump has been accused by Democrats of pushing for a citizenship question because it could lead to undercounts in mostly Democratic areas, and therefore fewer resources would be allocated to those areas. Multiple judges ruled against adding the question before the case reached the Supreme Court.

“It is not a political toy,” Los Angeles City Councilman David Ryu, 4th District, said. “Adding a citizenship question to the 2020 census will create a false count and steer funding away from communities that need it most. This is why six former directors of the Census Bureau and federal judges in three states rejected this question, and why it should be swiftly rejected by the Supreme Court.”

The presence of renters, who are more likely to move frequently; crowded housing units, which may include multiple occupants who are living there without landlord approval; and households receiving public assistance, which are prone to underreporting the number of occupants, are some of the factors that make the count difficult in Los Angeles and other areas throughout the state, in addition to the presence of undocumented immigrants.

“The Trump administration’s brazen, unconstitutional attempt to suppress the census count in cities and states with large immigrant populations – depriving us of the political representation and federal resources to which we’re entitled – must not stand,” Los Angeles City Attorney Mike Feuer said in a statement.

A citizenship question has not been included on the census since 1960, but it has been included for small sample sizes of the population, as well as in the Census Bureau’s annual American Community Survey.

“California is determined to ensure we achieve a complete census count,” Ditas Katague, director of the California Complete Count, said in a statement. “We’ve started early and are committing more resources than any other state on a robust outreach and engagement effort to reach all Californians. Our collaborative partnerships throughout the state will make a difference in 2020, which may be the most difficult Census count yet for California.”