The Wallis Annenberg Center for the Performing Arts presents the Los Angeles premiere of Renée Taylor’s “My Life On a Diet” running from Friday, April 5, through Sunday, April 14, in The Wallis’s Lovelace Studio Theater. 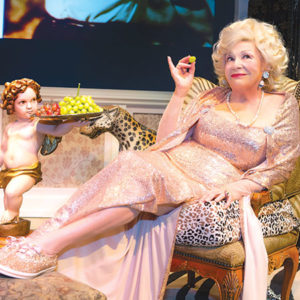 Renée Taylor stars in “My Life On a Diet,” an autobiographical comedy running through April 14 at The Wallis. (photo by Jeremy Daniel)

The award-winning, autobiographical comedy written by Taylor, co-star of “The Nanny” television series, and the late Joseph Bologna looks back on a life of memorable roles in Hollywood and on Broadway, and just as many fad diets. A self-described “diet junkie” who believed that if she ate like a star she might look and live like one, Taylor dishes out juicy anecdotes about – and weight loss tips from – Hollywood legends such as Joan Crawford, Marilyn Monroe and Barbra Streisand. She also tells stories about the late Bologna, her partner in work and life for 52 years.

“A few years ago, I had the pleasure to work with my friend Nora Ephron on her wonderful play, ‘Love, Loss, and What I Wore.’ I told her that, as a woman who had worn every size from four to 18 over the years, my version of the play would be called ‘Love, Loss, and What I Ate.’ Well, this is that play, but I ended up calling it ‘My Life on a Diet,’” Taylor said.

Masters of Taste takes the field at the Rose Bowl