Even some of the best superhero films run out of steam come the final showdown. From “The Dark Knight Rises” to “Guardians of the Galaxy Vol. 2,” going big becomes an excuse to replace sense with sensation. 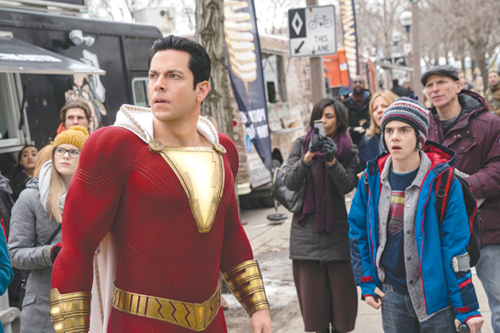 And then comes “Shazam!” Any film with an exclamation point in the title deserves suspicions (and intentional deletion of that mark from here on), yet DC Films’ latest contribution supports the working theory that the franchise responsible for too much trash might finally have emerged from its pit of despair. All it takes is a plethora of jokes, some feels and the charm of Zachary Levi.

Billy Batson (Asher Angel) bounced from foster home to foster home all over the Philly area. He never knew a proper family, idealizing his upbringing with a mother who abandoned him. One group home, run by Rosa (Marta Milans) and Victor Vasquez (Cooper Andrews, one of the best characters on “The Walking Dead”), is his last chance. But without blood ties, Billy resists personal connections, especially from Freddy Freeman (Jack Dylan Grazer).

And to complicate life as an “almost” 15-year-old, as Billy says, our young hero encounters a Gandalf figure simply called the Wizard (Djimon Hounsou), whose search concludes that Billy is the only worthy heir to his powers. By shouting “Shazam,” Billy looks very, very different. Sporting a red costume with a lightning strike emblazoned on his chest, he feels like a new man – keyword: man. When his powers activate, he transforms into a full-grown man. Enter Levi as the Shazam alter ego.

He might look the heroic part, but make no mistake, this is basically Tom Hanks’ “Big,” complete with juvenile behavior and even a quick ditty on a walking piano. Like “Big,” Billy confides in one friend, Freddy, who finally puts all his nerdy superhero knowledge to work. Like “Big,” the duo embarks on a slew of antics, from buying beer to filming YouTube videos of Billy’s newfound superpowers. And like “Big,” things get too real when Billy encounters Dr. Sivana (Mark Strong), who wants all the magic for himself. This forces the hero in training to decide if he will rise to the occasion or hide among his peers.

Fun fact: Kryptonite isn’t the only thing that can stop Superman. DC’s biggest tool also has trouble with magic. So, if you wanna take down the last son of Krypton, send Shazam after him, because the original Captain Marvel – formally called Shazam since 2012 thanks to a decades-long copyright battle between the Big Two of comics – can whip Kryptonian butt in an onscreen fight and easily at the box office. OK, “Shazam” might not surpass “Man of Steel,” but that shouldn’t detract from the film’s superior quality.

As the story of a foster child in search of parents he lost, “Shazam” doesn’t merely pull heart strings, but plays tug of war with them. And that incredible third act follows those themes to a wildly satisfying conclusion. No spoilers here, but the finale combines humor, spectacle and hope for something amazing that wonderfully sets up the next chapter. It all happens without placing an entire planet or even a city in jeopardy, too. 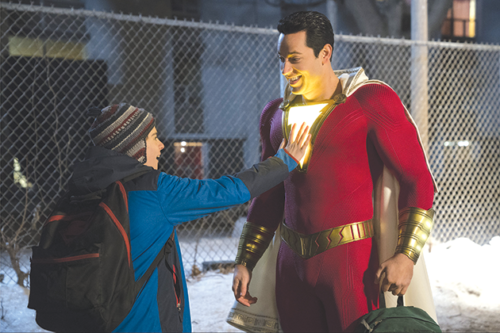 Junior director David F. Sandberg (“Lights Out,” “Annabelle: Creation”) proves the transition from horror to blockbuster logically tracks. And he even peppers a few ghoulish scares into the story, thanks to the Seven Deadly Sins – those pesky supernatural entities that possess Sivana – that look like jacked-up gargoyles.

One problem: Remember when “Power Rangers” and the live-action “Beauty and the Beast” reportedly featured gay or queer characters? Well, those moments turned out to last less than 20 seconds in both films combined, easily missed and hardly worth praising. “Shazam” includes another blink-and-miss moment that might hint at a gay character. One day, sexual diversity might make a lasting appearance in a superhero flick below an R rating, but for now, it’s easier to depict someone flying than someone who’s gay.

Hopefully, the sequel will build on this and provide a more brave and concrete depiction. After all, “Shazam” has plenty of room to grow, even if Dwayne Johnson never does play quintessential villain Black Adam, a dormant plan that could prove legendary if it comes true (though a mid-credit scene has other plans). A magic-based superhero can and should truly go anywhere.

Historical fact: The superhero movie genre began with the 1941 film serial “Adventures of Captain Marvel.” Almost 80 years later, the DC character returns to the silver screen with an even campier title, supported by an endearing and enduring story. “Shazam” is a magically fun cinematic adventure into an iconic superhero’s magical origin.

Opening the doors to showbiz’s past