‘Railfest’ returns to Fillmore on the last weekend of April

Visitors at “Railfest 2019” on Saturday and Sunday, April 27-28, in Fillmore, California, can view a rare narrow-gauge locomotive built in Germany that has never been on public display before in the United States. 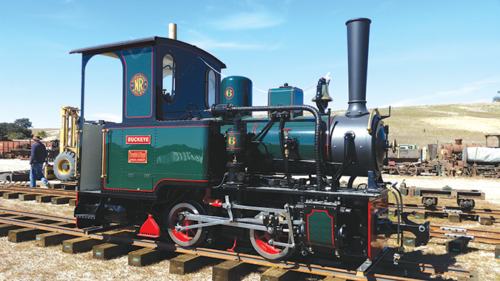 A full-restored 1935 locomotive known as the Buckeye will be among the vintage trains on display at the upcoming “Railfest 2019” in Fillmore. (photo courtesy of the Fillmore & Western Railway)

Known as the Buckeye, the locomotive was built in 1935 by the Orenstein & Koppel Locomotive Works. The two-foot gauge, wood and coal burning steam engine was shipped to Africa where it was used in mining and forestry operations. Hundreds of similar locomotives were once in service worldwide, primarily at industrial sites. Its sister engine, the Popeye, remains in Africa.

After its industrial application ended, the Buckeye was used as a children’s ride during the 1980s. The locomotive’s current owner, Peter Nott, had the engine shipped to his private workshop at Norgrove Gardens in Arroyo Grande, California. The Buckeye has been completely rebuilt and restored to mint condition.

It will be one of many vintage locomotives and trains on view at the family-friendly “Railfest 2019,” hosted by the Santa Clara River Valley Railroad Historical Society and the Fillmore & Western Railway. Described as a celebration of the “renaissance of railroading,” the festival showcases steam engines, antique tractors, vehicles and engines. It also includes unique performances, demonstrations on early transportation, vintage wares, oddities and culture mixed with steampunk fun.