Opening the doors to showbiz’s past

When tourists think of Tinseltown, the Walk of Fame on Hollywood Boulevard might be the most iconic symbol of the entertainment industry. 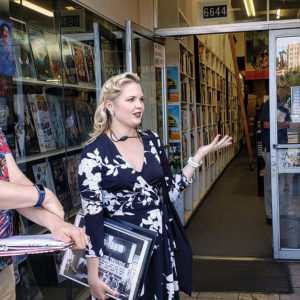 April Clemmer leads a tour that takes visitors and locals alike back in time by going between, around and behind the Hollywood Boulevard shops. (photo by Cameron Kiszla)

However, the throngs of visitors looking for an easy photo op have turned blocks that were once the stomping grounds of entertainment royalty into something that’s more akin to New York City’s Times Square, said Danny Jensen, author of the second edition of “100 Things to Do in L.A. Before You Die.”

“Hollywood [has become] kind of a touristy spot to go,” he said.

But behind the kitschy restaurants and souvenir shops, the real Hollywood history is waiting to be discovered.

On the Old Hollywood Walking Tour, tourists and locals alike can find the classic speakeasies of yesteryear, have a martini where Charlie Chaplin hung out, and discover how parts of Hollywood Boulevard have evolved.

Tour guide April Clemmer puts her encyclopedic knowledge of the late 19th and 20th centuries to use, starting with the days before Hollywood was associated with movies.

Back then, she said, “there were lemon groves, and you might smell orange blossoms … the total opposite of what we have going on today.”

But times have changed, and through the years, Los Angeles became synonymous with entertainment, creating a new and fascinating history. On her tours, Clemmer grants her audience access to places the regular public can’t go and fills them in on stories few others know.

It’s not all red carpets and bright lights.

“It wouldn’t be a tour of Hollywood without checking out a sketchy alley here and there,” Clemmer joked.

But as long as people aren’t afraid of a little dust, historic theaters and hidden homes offer a taste of the way things used to be along the stretch of Hollywood Boulevard between Cahuenga Boulevard and Highland Avenue.

“A lot of cool Hollywood history was right there in this area that was completely overlooked,” Clemmer said.

And even for locals who may have heard all this before or maybe aren’t interested in movies, the tour still has a lot to offer, including great ways to soak up the Southern California sunshine.

Jensen, who led a special edition of the tour earlier this month, said he and Clemmer both want to help locals explore like a tourist and find ways to reimagine a place they think they already know all about.

“There are really great, fun places to check out,” Jensen said.