An unidentified male suspect in his 20s was arrested on April 1 after allegedly committing a home invasion robbery in the 1100 block of South Longwood Avenue, just south of Olympic Boulevard. 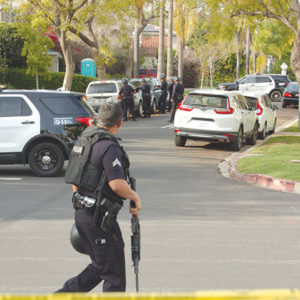 A home invasion robbery on Longwood Avenue prompted a large police response on April 1. No injuries were reported and one suspect was taken into custody. (photo by Edwin Folven)

An occupant of the residence called police at approximately 4:30 p.m. to notify them about a suspect breaking in. Two residents then locked themselves in a room when the suspect forced entry into the home.

A police helicopter quickly arrived and began circling as officers rushed to the scene. Police personnel armed with rifles and shotguns were stationed in front of the residence and on surrounding streets until a K-9 unit arrived. Officers sent a police dog to look for the suspect, and he was taken into custody near the rear of the residence shortly before 6 p.m.

Det. Bernard Romero, with the LAPD’s Wilshire Division, said the suspect was allegedly armed with a gun, but police were unable to locate the weapon. Two additional suspects, including one waiting in a vehicle, fled the scene before police arrived and are still being sought.

The two victims were not harmed. Romero said their quick action may have spared them from being injured. He also credited the police helicopter for arriving quickly and thwarting the suspects’ plan.

“These citizens had the good sense to call police right away and lock themselves in a room,” he added.

Romero said the detectives obtained security camera footage from the scene.  Investigators have been unable to tie the suspect in custody to any other crimes in the area.

Anyone with information is urged to call detectives with the LAPD’s Wilshire Division at (213)922-8205.

LAMOTH to open exhibit on women and violence