One of Los Angeles’ tourism hubs is now a little more visitor-friendly after 79 new signs were installed to help guide pedestrians around Hollywood. 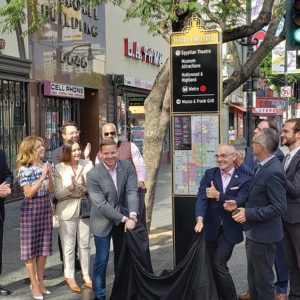 The signs, which have color-coded maps to help pedestrians orient themselves and arrows pointing to nearby landmarks, will help alleviate a longstanding problem in Hollywood, said Los Angeles City Councilman Mitch O’Farrell, 13th District.

O’Farrell was also complimentary of the guides’ Art Deco aesthetic, which the signs’ designer, Wayne Hunt of Pasadena’s Hunt Design, said he modeled on historic movie theaters, making the signs look like they’ve “always been here.”

“It looks like the way people expect things to look when they come to Hollywood,” Hunt said.

The new signs are an investment in Hollywood, O’Farrell said, to make it a place where locals and visitors alike shop at stores and dine at one-of-a-kind eateries, such as the famed Musso & Frank Grill on Hollywood Boulevard.

“[The signs] are specifically catered to serve people who are walking, and we want to get more people walking and exploring this wonderful neighborhood,” O’Farrell said.

Creating more foot traffic can help the local economy too, which in turn might help raise the quality of the whole area, he said.

“When neighborhoods look better and you elevate the standards of the public, then residents here and businesses will take pride in their community,” O’Farrell said.

The signs are just the first step in O’Farrell’s “HEART of Hollywood” initiative, which also plans to install signs that show changeable messages at several of Hollywood’s entrances and improvements to parking in the area.

Ken Husting, who manages parking for the Los Angeles Department of Transportation, said the organization plans to launch a new phone app called Park Smarter, install signs at parking garages to show how many spaces remain available, and implement demand-based parking prices. Before the end of the month, LADOT also plans to launch a new parking website, Husting said.

“The parking website will not only be more user-friendly and help provide more content, it will make parking easier in the city of Los Angeles,” he said.