When personnel at Los Angeles Fire Department’s Station 61 responded to a fire in a basement laundry room in Tower 41 at Park La Brea just before noon on April 8, they found thick smoke emanating from an adjacent storage closet. 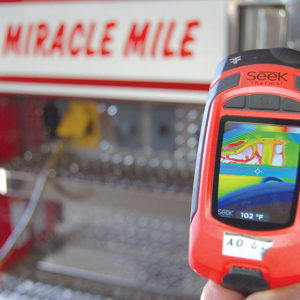 Unable to see through the smoke to pinpoint the origin, they switched on handheld thermal imaging cameras the size of smart phones and almost immediately determined it was coming from an exhaust fan that had overheated in the closet, said Capt. Rick Crawford. Thanks to the handheld devices, which were deployed to firefighters citywide three weeks ago, the fire was quickly located and contained. Crawford said firefighters at Station 61 have been using the handheld thermal imaging cameras daily.

“Anytime we go to a fire call, we will use them,” Crawford said. “[With the fire in the storage closet] it was smoky inside the room, so we were actually able to point [it] right toward the wall, and it turned out to be a burned-out exhaust fan. We were able to see where the heat was coming from, and this identified it pretty quickly through the smoke.”

Crawford said the handheld thermal imaging cameras, manufactured by Santa Barbara-based Seek Thermal and known as TICs, have an invaluable potential to save lives and property. Previously, firefighters assigned to each truck had one thermal imaging camera that used decades-old technology and was cumbersome. With the older model, a captain would search for the heat source and then relay it to the other firefighters. With handheld TICs, each firefighter can see where heat is coming from and can more rapidly address the situation.

Crawford said to fully understand the benefits of handheld TICs, one has to put themselves in a firefighter’s boots. When they enter a burning building, there is usually thick smoke and heat, noise and personnel moving in different directions performing a multitude of tasks. Many times, they have to hunker down on the floor below smoke and search for heat sources utilizing the more cumbersome older cameras, which can be more difficult. The cameras can see heat through walls, floors, roofs and other obstructions, and are also used to find victims who may be incapacitated inside burning structures or are otherwise trapped.

“The captains in the past are the ones who carried this, so we had to relay the information of what we see to the other members,” Crawford added. “On the fire ground, it’s a very dynamic situation and there is a lot of noise from other sirens and chainsaws, radios, there’s the fire burning itself, so it’s very noisy and it’s hard to talk. Picture being at a football stadium and you’re trying to talk to your partner when they score a touchdown. That’s how loud a fire situation can be. The issue was the other firefighters who were doing the work couldn’t typically see the thermal images that we see as the captains. So, each member having their own thermal imaging camera has enhanced safety a great deal.”

The handheld TICs have three modes: one to find heat sources, which appear as white images against a black background; a color mode that serves the same function of finding heat but shows sources as white and red; and a survey mode that enables firefighters to search for “hot spots” (places were a fire is smoldering, typically inside walls). The new TICs can also take photographs that are used later for training.

In addition to firefighting, Crawford said the new devices could prove invaluable in search and rescue operations, particularly after disasters such as earthquakes. The LAFD is the largest municipal fire department in the nation to provide the handheld devices to all on-duty personnel.

The new TICs cost $750 each. Compared to the $10,000 price of the older models, they are a cost savings for the department, Crawford said. The devices were purchased with funds provided by the Los Angeles Fire Department Foundation.

“The new thermal imaging cameras are a game changer when our firefighters are operating in the most hazardous conditions,” LAFD Fire Chief Ralph Terrazas said. “They allow firefighters to quickly locate and rescue trapped fire victims, as well as increasing their own safety and situational awareness while inside burning buildings.”

“The donation of these new cameras goes to the heart of the LAFD Foundation’s mission to provide crucial equipment to the department that may not be funded within its budget,” added LAFD Foundation President Liz Lin. “We’re working to secure additional donations with the goal of adding even more thermal imaging cameras to the LAFD inventory.”

Crawford said the handheld TIC’s are part of the LAFD’s push to use technology to improve efficiency, and he credited Terrazas for forward-thinking policies that also increase safety.

“We are trying to use technology to meet 21st century challenges,” he added. “This will be a very valuable tool.”

LACMA gets approval for new building