The Miracle Mile Residential Association said it will file a lawsuit to oppose the Los Angeles County Museum of Art’s new building, which the county supervisors unanimously approved on April 9. 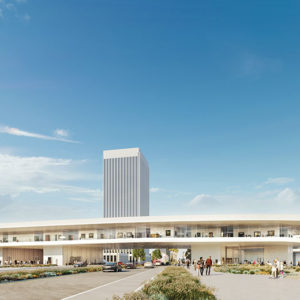 The proposed new LACMA building was approved by the Los Angeles County Board of Supervisors last week, but the Miracle Mile Residential Association plans to fight the project in court. (illustration by Atelier Peter Zumthor & Partner, courtesy of LACMA )

James O’Sullivan, president of the MMRA, said 11 members of the group’s board of directors voted unanimously on April 11 to pursue a lawsuit against the city and county of Los Angeles over the certification of the project’s final environmental impact report. An additional eight members sit on the board but were absent from the meeting.

O’Sullivan said the county and the city did not consider the true impact the project will have on the Miracle Mile.

“There are a lot of concerns and frankly, the community never had a voice,” O’Sullivan said.

For instance, he said, the area around LACMA has lost many parking spaces over the years, a problem that will be made worse when the nearby 260-spot Spaulding parking lot is overtaken by the new building.

O’Sullivan said the museum’s plan doesn’t provide enough parking because the new garage will also serve the Academy Museum of Motion Pictures, but Youn said the environmental impact report accounted for the parking required by both museums.

O’Sullivan also claimed work in the Spaulding lot will require crews to dig down for the construction of the building-supporting pylons, which could possibly fracture foundations of nearby buildings.

Youn said the excavation work is not adjacent to any foundations outside of the LACMA property and the work that is done will be properly supported, so “excavation will not impose any adverse impact to the nearby structures.”

O’Sullivan also said the museum, which will span Wilshire Boulevard, would block the views on a scenic highway, something Steve Kramer, president of the Greater Miracle Mile Chamber of Commerce and a supporter of the new LACMA building, disagreed with, saying the Peter Zumthor-designed structure will make Wilshire “a far more scenic highway.”

“I think his concern for the community has roots in genuine feeling, but sometimes I wonder if the fight is what’s more enticing,” Kramer said.

This isn’t O’Sullivan’s first battle against museum renovations on behalf of the MMRA. He appealed the 2013 approval of the Petersen Automotive Museum’s new façade, but his appeal was denied.

O’Sullivan said he and his group are working to raise funds for the lawsuit, which could cost as much as $75,000 or $100,000. So far, O’Sullivan said one other group made up of “people that live in the area who will be impacted by this project” has agreed to join on, though he declined  to name the group.

What a waste of everyone’s time and money. These frivolous, knee-jerk lawsuits, to any and every bit of new development are expensive, and damaging. The city needs to reign in these “community groups” that basically just represent the interests of a few local busybodies, in no one’s interest.

As a resident of the area around LACMA, and typically a supporter of MMRA’s goals, I disagree with this costly appeal effort. I would have preferred a different design as well, and have my concerns about the Wilshire overpass and parking availability, but the matter has been voted on and we lost, so time to move on. Wilshire Blvd desperately needs some TLC (new offices, restaurants, residential, retail), so I don’t want to slow the progress with a lawsuit that will undoubtedly fail.