Mulholland’s legacy heralded in his hometown 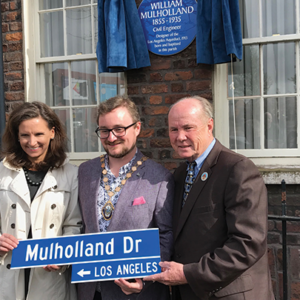 LaBonge, who also formerly served as communications director for the Los Angeles Department of Water and Power, participated as a private citizen. He joined U.S. officials and representatives from Northern Ireland for a ceremony in Mulholland’s hometown of Belfast.

Mullholland designed and oversaw construction of the Los Angeles Aqueduct, which brings water from the Owens Valley to the San Fernando Valley. His work is credited with providing a foundation that enabled the city of Los Angeles to expand into a metropolis.

LaBonge also donated a signed copy of a book by Mulholland’s late granddaughter Catherine to the Belfast Central Library. A commemorative plaque was placed at the site of Mulholland’s former parish on Donegal Street in the capital of Northern Ireland. Mulholland died in 1935.