Excitement is brewing over the former Firestone service center at the southeast corner of La Brea Avenue and Eighth Street, as crews have recently been working at the building. 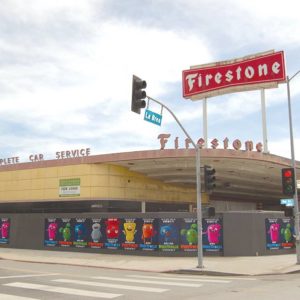 Plans have been approved for a former Firestone service center at Eighth Street and La Brea Avenue to be converted into a microbrewery. (photo by Edwin Folven)

Last week, workers were conducting fire system maintenance and installing sprinklers. The property owner, Conroy Commercial, applied and received numerous permits from the Los Angeles Department of Building and Safety since the beginning of the year for the electrical, plumbing, heating and air conditioning systems, among other interior work. The city also recently approved a floor plan submitted by the developer, which was granted permission to create a microbrewery with food service and retail sales at the site in 2017. The floor plan shows space for brewing tanks as well as kitchen space, and dining and retail areas.

But many details of the project are unknown, such as what the venue will be called, when it will open, what types of food and beverages will be offered and where parking will be provided. Representatives of Conroy Commercial did not provide any information despite repeated requests for comment.

The unanswered questions have not affected the anticipation of preservationists and some residents of the surrounding neighborhood who supported the concept of a microbrewery occupying the space. The building was designated as a city of Los Angeles historic-cultural monument in 2012. Conroy Commercial has pledged to maintain the historic façade, signage and other exterior features of the building, according to information previously provided by the developer. The building served as an automotive service center until it closed four years ago and has remained vacant since.

“There is general enthusiasm for the idea,” said Conrad Starr, president of the Sycamore Square Neighborhood Association. “They are happy it will be put to a use that could benefit the community, rather than a closed usage like offices.”

“I’m always pleased when new businesses add vitality to our neighborhoods while working with the community and honoring the nature of our historic buildings,” Ryu said. “I hope this new life for the iconic Firestone building will only make the area an even better place to live and visit.”

Ken Bernstein, principal city planner with the Office of Historic Resources, said the building, which opened in 1937, was designated historic based on it being an excellent example of Streamline Moderne auto-related architecture.

Starr said a microbrewery at the site would complement the retail experience at Eighth and La Brea, where Commerson restaurant, Met Her At A Bar café, Rascal and Little Bar are located on other corners.

“It’s something we were really excited to see. We’d like to see the space restored and reused,” Starr added. “We are passively waiting now.”

Down to a fine art in Beverly Hills

Hammering out details for Town and Country project

If history is any guide, the team at Conroy Commercial will end up doing nothing with this Firestone property except probably sell it to someone else. They’ve been involved with numerous stalled projects in the past (like Edin Park food hall on Beverly Blvd). I’m not sure what their agenda is (perhaps just trying to boost a property’s value before selling it?), but I usually take any announcement by them with a grain of salt.

Hopefully they will have reasonable prices on the brews and the food. And maybe low priced valet parking.

Conroy Commercial runs a slimy business and property management. Take a look at what they did to Good Luck Bar.

They haven’t figured out parking? Maybe on the roof. The restaurants along La Brea are getting very popular and there’s permit parking after 6 pm in the neighborhoods. I have no idea where people are putting their cars!