The Los Angeles LGBT Center celebrated the grand opening on April 7 of the new Anita May Rosenstein Campus, a two-acre complex that will serve LBGTQ seniors and youth. 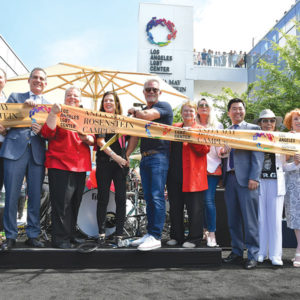 To commemorate the opening, which occurred two years after breaking ground for the campus along the north side of Santa Monica Boulevard east of Highland Avenue, the center hosted a free block party attended by government officials and hundreds of people from the local community. U.S. Rep. Adam Schiff, Los Angeles Mayor Eric Garcetti and Councilman David Ryu, 4th District, joined center representatives and celebrities at a ribbon cutting ceremony. The event also included tours and musical performances.

“We are immensely proud that the Anita May Rosenstein Campus allows us to greatly expand our services, especially to LGBT seniors and youth,” Los Angeles LGBT Center CEO Lorri L. Jean said. “The campus is proof that a committed group of people who have the audacity to dream big and work hard are capable of creating something the world has never seen, something that now stands as a testament to the fact that we will not turn back in our march toward full equality and humanity.”

The center’s current headquarters at the McDonald/Wright Building on Schrader Boulevard in Hollywood will exclusively become a health center. A second phase of the new campus is scheduled to open in mid-2020 and will include 99 affordable housing units for seniors and 25 supportive housing apartments for youth.

“Let’s be clear, this is not my campus, it’s our campus,” Rosenstein said. “Our campus is a beacon of hope and inspiration for people around the world. It is a safe haven for youth experiencing homelessness, and it will become a unique experience for youth and seniors to live together and learn from each other.”

The cost of the campus exceeded $141 million. Of that amount, more than $57 million has been raised through gifts from individuals and foundations, and $9.5 million in New Market Tax Credits. The affordable housing costs of $63 million were funded by government allocations and other sources. After combining the gifts to the capital campaign and a contribution from the center’s strategic reserve fund, the campus will be mortgage-free once all of the pledges are paid.

Officials attending the opening ceremony praised the center as a critical space for the LGBTQ community.

“The night after the last presidential election, I joined hundreds of residents at the L.A. LGBT Center to discuss what it meant for the nation and the cause of equality. We knew there would be hard days ahead, and there have been, but we also knew that we would overcome the forces of division and hate,” Schiff said. “At the opening of the center’s Anita May Rosenstein Campus, we celebrate another victory on the road to a more inclusive society. I was proud to join CEO Lorri Jean, actress Joely Fisher, and many others for the opening of this landmark achievement.”

“The Anita May Rosenstein Campus is a flagship project for addressing homelessness in Hollywood and Council District 4,” Ryu added. “There’s no project quite like this. With an array of on-site services, classes, counseling and housing for more than 200 individuals facing homelessness, this inter-generational campus for seniors and transitional-aged youth will save lives and be a point of pride for the Hollywood community. I’m honored to be a part of this project and to see it open its doors.”

Charity to shoot free throws to shine light on homeless