More than 50 theaters, churches, schools and other venues across Los Angeles will host dozens of performances to raise money for homelessness from April 26 through May 5. 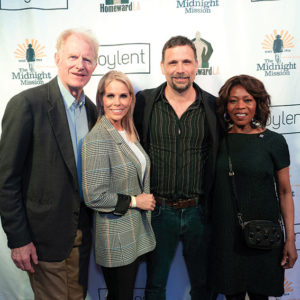 The program, called Homeward LA, will put on dozens of performances at more than 50 places between April 26 and May 5.

This is the second year of Homeward LA, which raised about $55,000 last year in ticket sales and donations. Jason Lesner, the event’s founder and project director, said Homeward LA wants to raise $150,000 this year between ticket sales, donations and the kickoff event at the Egyptian Theater on April 23. All of the money raised goes to the nonprofit Midnight Mission on Skid Row, which Lesner said has been a respected organization for outreach to homeless people for more than 100 years.

“When I first met with them and took a tour of the facility, I was very moved by who they’re working with and their work, it’s very effective,” Lesner said.

In an effort to help, Lesner got members of the entertainment industry involved, including some writers who met with people who were helped by the Midnight Mission. The writers turned those meetings into a series of 11 stories, which hundreds of actors across Los Angeles will perform during Homeward LA’s 10-day run.

Not all of the stories directly deal with homelessness. Some are anecdotes from peoples’ childhoods, and others talk about family and friends more than the struggles of what many imagine homelessness to be. That’s because the Homeward LA shows want to humanize their subjects, not define homeless people by their homelessness, Lesner said. Instead, the knowledge that these are the stories of people who have been homeless will be the backdrop, not the direct focus.

“We wanted to tell stories that people can see themselves in,” he said.

Many of the shows will likely use minimal set design, as Lesner discouraged the productions from using cliched depictions of homelessness like tents and shopping carts, which could distract from the stories or increase production budgets that would eat into the money raised for the Midnight Mission.

But even without a lot of set decoration or expensive costumes, those involved with the Homeward LA show at Beverly Hills’ Theatre 40 said the show is well worth the $20 price of admission.

David Hunt Stafford, Theatre 40’s artistic director and an actor who will portray the character Dusty during his group’s April 28 show, said this is a great way for people to assist the homeless in an impactful way.

“We’re all very, very aware of the problem. You see a guy under a bridge and … you don’t know what to do to help. So, this helps,” Stafford said.

Jules Aaron, who is directing the Theatre 40 show, said not only will the audience get to experience great theater, but they can leave with a sense of satisfaction.

“This gives you a personal feeling that you’re devoting something that’s personal of you into raising money, rather than just writing a check,” Aaron said.

Lesner said the best way to ensure Homeward LA’s continued success is to put on a performance people won’t want to miss.

“The goal is for this to be an annual event. We want people to come back and want to hear more stories,” he said.

A hidden gem at Cliff’s Edge