On April 24, 1915, the government of the Ottoman Empire rounded up more than 200 notable Armenians in Constantinople. Over the next few years, 1.5 million Armenians lost their lives in one of the first modern genocides. 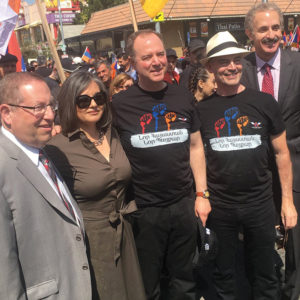 In the century since then, Constantinople became Istanbul and the Ottoman Empire became Turkey, but there has been no recognition of a systematic effort to destroy the Armenian people from the Turkish government, which said the mass killings were only part of World War I.

However, when the word genocide was coined by Raphael Lemkin, he cited the Armenian Genocide as an example, and what happened to the Armenian people during and after World War I has been recognized as a genocide by a variety of governmental and religious groups, including the United Nations, Roman Catholic Church, 30 countries and every American state except for Mississippi.

Though the U.S. government has not recognized the Armenian Genocide, U.S. Reps. Adam Schiff (D-Burbank) and Gus Bilirakis (R-Fla.) introduced a bill to change that earlier this month. Schiff said it has “always been outrageous” that U.S. relations with Turkey prevented the government from recognizing the genocide, but nearly 90 members of the House have agreed to cosponsor the bill, which will identify the genocide for what it is. Schiff has proposed similar legislation several times before.

“The denial of the genocide is an enduring wound to the Armenian people who descended from survivors to build lives here in the United States, in Armenia, and around the world,” he said.

On April 24, Armenian Americans marched for recognition in Little Armenia and gathered at the Turkish Consulate on Wilshire Boulevard, where they were joined by Schiff, Los Angeles Mayor Eric Garcetti and U.S. Rep. Brad Sherman (D-Sherman Oaks).

In addition, CHA Hollywood Presbyterian Medical Center, located near Little Armenia, held a remembrance event on April 23. Students from the Rose and Alex Pilibos Amenian School gave a presentation on the Armenian Genocide and discussed ways to use present-day technology, such as social media, to advocate for recognition of past genocides and prevent future genocides.

During the event, some of the hospital’s Armenian American doctors and employees were in attendance, and several of them were moved to tears by the presentation and impromptu performance of an Armenian song by Armenian hospital employee Anait Rezyan.

Rezyan said she wanted to sing because people everywhere should know there are 10 million Armenians spread around the world who were all affected by a genocide that killed so many.

“Thank God they let me sing,” she said.

Sofia Gezalyan, the hospital’s director of inpatient pharmacy and a descendent of Armenian Genocide survivors, said she was proud of the hospital and its administration for making an effort to recognize the genocide.

“This is for us as an overall culture,” she said. “Simple recognition [provides] respect to all those lives that were lost and hopes to prevent any future genocides.”

Robert Allen, the hospital’s CEO, said Armenian people are an important part of the community, and he hopes to hold an Armenian Genocide Remembrance Event again next year.

“There were a lot of touched people here today,” he said.