In the not too distant past, anyone who wanted to discuss cleaning up the Los Angeles River would have to begin by explaining to many Angelenos that the river even exists. 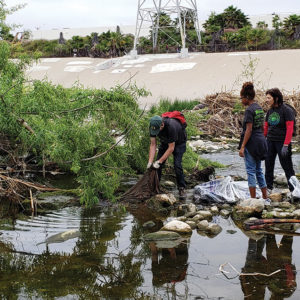 Susan O’Connell of Larchmont Village was one of thousands of Angelenos who have volunteered to clean up the Los Angeles River. Saturday, April 27, is the last day to participate. (photo by Cameron Kiszla)

Los Angeles City Councilman Mitch O’Farrell, 13th District, said that was the case sometimes when he first got involved with the Friends of the LA River’s Great LA River CleanUp in 2002, but in the years since, that’s changed.

The growing awareness was on full display at Lewis MacAdams Riverfront Park on April 20, when O’Farrell, Los Angeles City Councilman David Ryu, 4th District, Assemblywoman Wendy Carrillo (D-Los Angeles), representatives from FoLAR and others gathered to mark the 30th annual cleanup and get to work on cleaning up the middle section of the river.

M-K O’Connell, who serves on FoLAR’s board, said in the 13 years he’s been involved with the group, he’s already seen the 51-mile river improve, which is encouraging Angelenos to enjoy the “incredible natural resource.”

A big part of that improvement has been the removal of trash from the river. Marissa Christiansen, FoLAR’s executive director, said over the last three decades, 400 tons of trash has been removed from the river by 70,000 volunteers, making this event the largest river cleanup in the country in terms of volunteers mobilized, Christiansen said.

It may have started with MacAdams, the park’s namesake and FoLAR’s founder, and a few of his friends, but the Great LA River CleanUp has become a way for people to see a tangible positive impact in their communities, Christiansen said.

“This is a very easy and feel-good way to get that done,” she said.

As the event has grown, it’s changed as well, largely because people’s habits have changed over the years, said Michael Atkins, FoLAR’s communications and impact manager. The trash collected by volunteers once included kitchen appliances or, in one case, a car, he said.

“Now, it’s a lot of plastic, a lot of single-use products. A lot of chip bags and a lot of juice pouches make it to the river from being on our streets,” he said.

One of those single-use products, however, may become rarer in the future. Los Angeles’ straws only by request ordinance went into effect on April 22, which officials hope will cut down on litter.

“We expect that this will change for the better once this ordinance goes into place,” O’Farrell said.

The straws-on-request ordinance won’t be a quick fix. Christiansen pointed out that while straws make up a big portion of the trash that’s collected, other single-use plastic items and cigarette butts are also a common find.

But still, officials were hopeful the straw restriction would make a noticeable impact the way the ban on microbeads – tiny particles often found in personal care products like face wash – did a few years ago.

“Like most things, it will probably take a little time, but every little bit counts,” Ryu said.