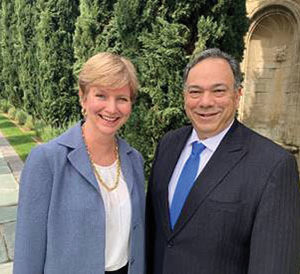 Hunt-Coffey, who currently serves as director of community services, will join Chavez in the city manager’s office when he assumes the position in June.

“Nancy is deeply committed to public service and to Beverly Hills,” Chavez said. “She has led the complex Community Services Department with poise and passion and I look forward to our partnership in the years ahead.”

As assistant city manager, Hunt-Coffey will assist in the daily management of city operations, provide oversight of select departments and work closely with the City Council.

“I am so thankful to George and the City Council for the trust they have placed in me,” Hunt-Coffey said. “I am proud to live and work in this community and look forward to supporting our talented city staff as we provide the highest quality of customer service.”

Hunt-Coffey earned her Bachelor of Arts in English and Spanish literature from Occidental College and her master’s degree in information studies from UCLA.