The ongoing contract battle between Cedars-Sinai Medical Center and the union that represents hundreds of its workers has spilled out into the streets, specifically Beverly Boulevard, Third Street, and Fairfax and Melrose avenues. 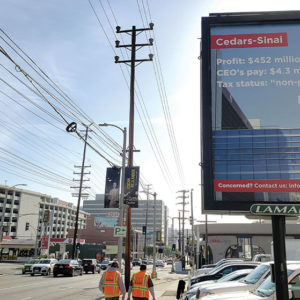 SEIU-United Healthcare Workers West, the union for more than 1,800 employees at Cedars-Sinai Medical Center, put up seven billboards near the hospital to draw attention to what the union describes as excessive profits. (photo by Cameron Kiszla)

Sean Wherley, a spokesman for the union, said the concerns raised on the billboards are separate issues from the contract negotiations, a notion Cedars-Sinai disputed in a statement.

“The billboards placed recently by the union are part of an effort to influence the negotiations,” the hospital said.

The dispute is ongoing, and after the collective bargaining agreement expired on March 31, the approximately 1,800 people represented by SEIU-UHW are working without a contract in place. Several issues, including employee benefits, are being discussed.

A statement from Cedars-Sinai said the hospital’s board of directors wants employee compensation to be based on “merit of their individual performance, a rigorous review of each position’s responsibilities, and comparisons with other organizations for positions with similar responsibilities.”

A statement from the union said the workers are “eager to reach an agreement with management.”

“However, that can only happen after hospital executives stop trying to aggressively outsource jobs for lower pay and eliminating workers’ right to collectively bargain on important benefits like health insurance and sick leave,” the statement said.

Los Angeles City Councilman Paul Koretz, 5th District, said he’s been working to bridge the gap between the union and the hospital. He’s spoken to hospital administrators and at an SEIU-UHW rally to try to bring the two sides together.

“Cedars-Sinai has built and enjoys a world-class reputation [based] upon the highest standards of care that are given by their employees,” Koretz said.

In the meantime, the billboards might irritate some of the Cedars-Sinai administrators.

Wherley said the billboards, all of which are within a mile or two of the hospital, were purchased to make the community aware of the financial situation at Cedars, which paid Priselac $4.3 million for the fiscal year ending in June 2017, IRS records show.

In its statement, Cedars-Sinai said it’s “proud” of the quality of its health care, and Priselac’s payment “appropriately reflects his more-than-two-decade tenure of successfully presiding over the western United States’ largest not-for-profit hospital.”

Though the hospital is a nonprofit, Wherley said Cedars-Sinai earned $452 million in profits in 2017, and only about 2% of that went to charity care. Cedars-Sinai’s audited financial statements for fiscal year 2017 show a profit of $452 million for the medical center, though that figure drops to $378 million when the hospital’s foundation and Marina Del Rey Hospital are included. According to data from the state’s Office of Statewide Health Planning & Development, Cedars-Sinai Medical Center’s charity care in 2017 amounted to about 2% of its net income.

“At a minimum, it should be 5%. That’s a level comparable to other facilities in L.A. How is it that these other lower-profile, less-wealthy hospitals are providing more of their income toward charity care than Cedars?” Wherley said.

Cedars-Sinai’s statement said that during Priselac’s time as CEO, the hospital has expanded its commitment to the area.

“Over the last 10 years alone, Cedars-Sinai has invested nearly $6 billion to benefit the local community by, among other things, providing free or part-pay care for patients who cannot afford treatment; by losses caring for Medicare and Medi-Cal patients; and by providing a wide range of free health programs and clinics in neighborhoods as well as education and health services in dozens of local schools, community centers and homeless shelters,” the statement said.

Wherley said he believes the hospital could be doing more.

“A place as wealthy as Cedars has a responsibility to do right by the community, its patients and its workers,” he said.

Dodgers to commemorate Robinson this weekend