Hollywood Museum to show its love for Lucy

The Hollywood Museum is paying tribute to actress, comedian, model and producer Lucille Ball with an exhibit and tribute on Wednesday, April 24, from 6 to 8 p.m.

The celebration and exhibit will honor Ball prior to the 30th anniversary of her passing on April 26, 1989. It is also being held in connection with a “Mysteries at the Museum” episode on Ball recently filmed at the Hollywood Museum. 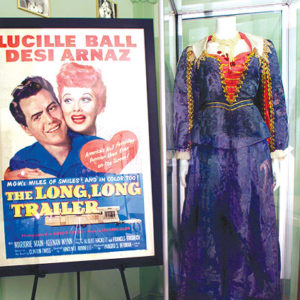 Hollywood Museum President and Founder Donelle Dadigan announced the launch of a week-long Lucille Ball tribute, with special items on display in the lobby and the “Redheads Only Room,” where Max Factor created and perfected Ball’s famous appearance.

The tribute runs from 6 to 8 p.m. on April 24. Many celebrities are scheduled to attend. The lobby exhibit will be on display until May 1, and the items will then be moved into the “Redheads Only Room” for a minimum of three months.

The Hollywood Museum is located at 1660 N. Highland Ave. For information, visit thehollywoodmuseum.com.