The public can get a behind-the-scenes look at law enforcement when the Los Angeles Police Department’s Hollywood Division welcomes the community to an open house on Saturday, April 27, from noon to 3 p.m. at 1358 N. Wilcox Ave. 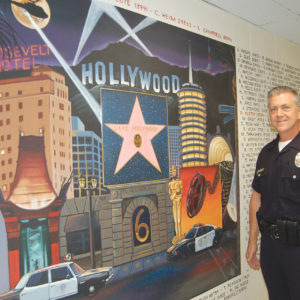 The street in front of the police station will be closed to traffic and the event includes special guests, exhibits, demonstrations, entertainment, food and more. The public can tour the station, which opened in 1913, and learn about police programs. The open house is part of the LAPD’s 150th anniversary celebration in 2019, with police stations throughout the city hosting open houses. The Wilshire Division’s open house is scheduled on May 19.

Visitors can meet some of Hollywood Division’s 400 officers in an informal setting that promotes partnerships. Wreaths will be placed next to a memorial for the eight officers from the station killed in the line of duty. Actor Kent McCord, known for his role as Officer Jim Reed on the television series “Adam-12,” will greet fans and pose for photos. A special exhibit will enable guests to have their name printed on likeness of a Hollywood Walk of Fame star.

Senior Lead Officer Paul Jordan helped organize the open house, which he said will be unlike anything the division has previously hosted. He likened it to planning a wedding and said the division is pulling out all the stops.

“From a police officer’s point of view, I don’t think there is anything cooler than posing for a picture with Kent McCord,” Jordan said. “To give it that Hollywood flavor, we have the actual person who makes the stars on the Walk of Fame [Carmine Goglia]. He is going to be here with an exhibit, an 8-by-10 backdrop, and he’ll put whatever name you want on a star and you can pose for a picture with that. It’s really cool. A lot of people are excited about it.”

Other special guests include Amy Aquino from the television series “Bosch,” and author Joseph Wambaugh, a former LAPD officer who has written books about the department including “The Onion Field” and the “Hollywood Station” series.

Jordan said a highlight will be the food, which is being catered by the Dream Hollywood Hotel. He added that another popular component will be the department’s Force Option Simulator, which is rarely open to the public. The simulator places people in real-life situations requiring split-second decision making, allowing them to experience what officers go through when encountering dangerous situations. All officers train in the simulator twice a year.

“You put a Sam Browne belt on with a rubber gun and it’s almost like a video game. You watch a movie and are told to react to what you see on the screen,” Jordan added. “I can tell you, it changes everyone’s perception of what we do when you stand in front of that simulator.”

The public can also tour the police station and see the booking area, detective unit, weapons storage room and other facilities. A special dedication ceremony will be held during the open house for the station’s newly remodeled roll call room, a project funded by the Dream Hollywood Hotel. Members of the cadet, junior cadet and police activities league programs for youth will also be present, highlighting opportunities for community involvement.

“We hope everyone comes down and enjoys themselves,” Jordan added. “It will be a fun event that celebrates the department, the Hollywood Division and the community.”

VINTAGE: Remembering those lost during the Holocaust