This is a big year for superhero films. “Captain Marvel” marked the first superheroine-led film to pass $1 billion at the box office. “Shazam!” restored faith in DC Films. “Avengers: Endgame” will be the end of an era. 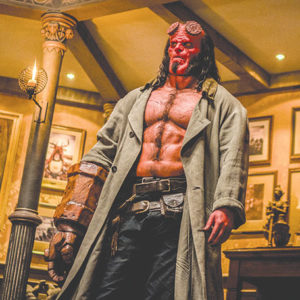 David Harbour stars as Hellboy in a reboot of the film franchise about a superhero from the underworld. (photo courtesy of Summit Entertainment)

And then there’s “Hellboy,” a raunchy reboot of the superhero previously played by Ron Perlman in a couple satisfying films directed by cinema god Guillermo del Toro. That’s all done, and what remains, albeit watchable, introduces a new wave of grosser, dumber superhero fare.

As the third “Hellboy” film, the titular hero’s origin is sporadically reintroduced but never dwelled upon. Hellboy (David Harbour from “Strangers Things”) faces a different foe, Nimue, the Blood Queen (Milla Jovovich), once defeated by the Knights of the Round Table. She wants to unleash all evil beings from below with big red as her bae. To stop the evil Fifth Element, Hellboy’s team includes clairvoyant Alice Monaghan (Sasha Lane) and British M-11 operative Major Ben Daimio (Daniel Dae Kim), whose special ability arrives far too late in the film.

Following “Deadpool’s” breakout successful, a wave of R-rated superhero flicks would soon follow. That’s a bad lesson to learn from the merc with a mouth – gore over quirkiness – but actioners aren’t known for narrative bravery. Certainly this “Hellboy” goes big: vampires, giants, dragons, apparitions, demons, even King Arthur and his trusty saber Excalibur. Horror, fantasy and science fiction all wrapped into an outlandish super package.

Sure, a more tempered approach to filmmaking obligates any sensible moviegoer to slam “Hellboy” for its bombastic erosion of once clear genre lines and tired visual excess. But such pretentious positions feel like the last remnant of a dying age, like a VHS collector bemoaning the VCR’s discontinuation. On principle, such oddities are worthy of praise. In practice, “Hellboy” is a mess.

For any fans of the Dark Horse Comics character, this take on the snarky demon with a drinking problem hits closer to the print version introduced more than 25 years ago. To the film’s credit, Harbour actually rises to the challenge of following Perlman’s incredibly memorable performance. Alas, for all his charm, Harbour must deliver some truly trite lines of dialogue behind some rather distracting makeup. 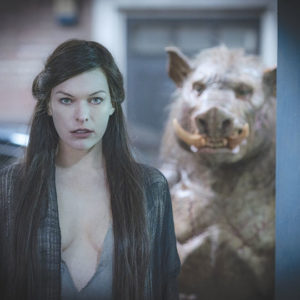 Milla Jovovich appears as the villainous Nimue, the Blood Queen, in the latest “Hellboy” film. (photo courtesy of Summit Entertainment)

And Neil Marshall – returning to film after directing TV episodes for the likes of “Game of Thrones,” “Westworld” and “Lost in Space” – seems an appropriate fit. Once the promising horror auteur behind 2005’s “The Descent,” still one of the scariest modern films, Marshall would contribute a couple of duds. “Hellboy” marks his return to the big screen but hardly proves he returns to form.

And Ian McShane as Professor Broom doling out fatherly advice to Hellboy like “grow a pair” has aged as well as Taco Bell’s old slogan, “run for the border.” Blame screenwriter Andrew Cosby, creator of Syfy’s “Eureka,” for these moments. The guy clearly has a background in genre fiction and years of practice running a show. Too bad this script embraces cliché lines and predictable blocking.

Hellboy is hardly a hot commodity, originally a film for Columbia and then Universal Pictures. Now, Summit Entertainment takes the reins. But rather than treat the material with care, the new overlords favor a B-movie sensibility instead of a movie both fun and well-executed. The result is more “I, Frankenstein,” “Legion,” “Van Helsing” and a polluted sea of horror-lite action flicks destined to air during the offseason on basic cable.

The final moments of the film present a fully realized monster-fighting team, promising something far more interesting in the future. Hopefully “Hellboy” has a few more hurrahs left in him once the dust settles (it might recoup its $50 million budget) and a new creative team tries again. In the meantime, perhaps this one goes better with a Twinkie and shot of off-brand whiskey at home than a night out at the movies.

Food and wine benefit will be ‘Simply diVine’