Hammering out details for Town and Country project

The picture is getting clearer regarding a potential mixed-use project that aims to replace the Town and Country Shopping Center. 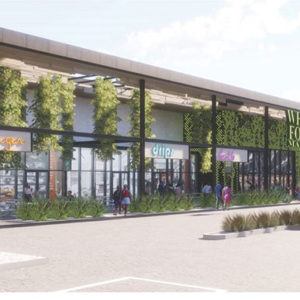 Developers of a new mixed-used project at the site of the Town and Country Shopping Center plan to retain Citibank, Whole Foods and CVS. (rendering courtesy of RDC Collaborative)

At an April 11 meeting of the Greater Miracle Mile Chamber of Commerce, John Nahas, vice president of investments for property owner Regency Centers, shed more light on the project, which currently goes by the name Town and Country at 3rd and Fairfax but may change later in the process.

The project, which is being developed by the Holland Partner Group, will have two levels of retail space and four stories of residential area, Nahas said, though the retail floors will be double height, making the six-story project appear to be closer to eight stories tall. There will also be two levels of underground parking beneath the building.

Citibank will remain in its current position in the parking lot, and a good portion of the retail space will be occupied by CVS and Whole Foods. A 30-foot-wide space in front of Whole Foods will serve as a buffer between a lounging area and cars.

Some of the other stores, including Kmart, will leave, and the development team is looking for another retail anchor to open on the second floor, Nahas said.

As for the residential space, the building is expected to hold 325 apartments, though that number may change as the project moves forward, Nahas said. None of the units will be for affordable housing because it would make the project too dense, which would have an impact on traffic, he said.

Construction is expected to take 32 months, starting in mid-2020 and going through 2023, which Nahas said is about average for a multifamily housing project, especially one that includes underground parking. The area is also home to pockets of methane gas, like the one that exploded in 1985.

“It’s a methodical process … It takes a little more time to do it right,” he said.

The project’s developers have been fielding input from the public, including from a working group of stakeholders assembled by Councilman David Ryu, 4th District, and the project team is working to include that feedback in the draft environmental impact report, Nahas said.

Nahas said the team behind the project voluntarily chose to go through an environmental impact report, the top level of environmental review, instead of a mitigated negative declaration, a mid-level option. That EIR is expected to be submitted to the city in July or August for public review, then there will be time for more public input.

Nahas said the development team hopes to have a final EIR done by the end of this year or early next year. Then the project will be considered by the Los Angeles City Council’s planning and land use committee, followed by the full council.

Some in the community are worried about the impact on Hancock Park Elementary School, which is adjacent to the project site. Ashley Parker, the school’s principal, said she was out of town and unable to answer questions, but Shanon Trygstad, president of the Friends of Hancock Park School, said many at the school are worried about the impacts of construction on students.

For example, she said, students could be exposed to pollutants in the air that would be released by the demolition of the current buildings, as well as emissions from the construction equipment.

Trygstad, who is part of the working group, said the development team has expressed interest in mitigating those concerns, which will be studied during the EIR process, but nothing has been promised yet.

“We’re hoping to make the best of a situation we don’t like and minimize the impact on the kids,” she said.

In a statement through a Los Angeles Unified School District spokesperson, Nick Melvoin, vice president of the LAUSD board, said he shared the concerns about the project’s environmental impact on students “not just from this development project, but in regards to any potential hazards that pose a risk to our students.”

“Once the environmental impact report is complete, we all need to work together to ensure that the health and safety of the students of Hancock Park Elementary is a priority for all parties involved,” he said.

LAUSD spokesperson Shannon Haber added that the school district has several representatives on Ryu’s working group, and some of the district’s concerns were addressed when the developer reduced the scope of the project.

“We have also submitted a comment letter during the scoping process outlining the school community’s remaining concerns,” the spokesperson said. “Staff will review and comment on the environmental impact report when it becomes available. As always, the safety of our students and staff remains our top priority.”