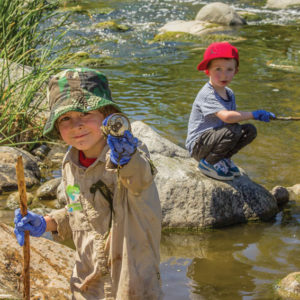 The Great Los Angeles River CleanUp will be held from 9 a.m. to noon on April 13, 20 and 27 at 11 sites along the river. (photo courtesy of the Friends of the L.A. River)

The CleanUp is a popular annual event for Angelenos of all ages and backgrounds, attracting families, students, community members,and elected officials to the 51-mile-long river.

The final event on April 27 covers the lower river. Events will be held at Compton Creek at Del Amo Metro Station, the Willow Street Estuary and the Golden Shore Marine Reserve.

This year, the ‘Plastic Straws on Request’ ordinance was just approved by the Los Angeles City Council, with the first phase taking effect on Earth Day, April 22.

“We’ve been reflecting quite a bit about how the L.A. River has evolved over 30 years, and even more so, how Angelenos and the cities along the river have evolved in their thinking about what is bound to be the centerpiece of urban planning in these communities for years to come,” FoLAR Executive Director Marissa Christiansen said.

FoLAR welcomes Postmates as a major sponsor and supporter of the CleanUp, as well as the cities of Los Angeles and Long Beach.

“The L.A .River is a remarkable treasure with unlimited potential for everyone who lives in or visits Los Angeles,” Los Angeles Mayor Eric Garcetti said. “Thanks to FoLAR’s 30 years of service, our river has become a destination for people across our city to connect with the natural world.”

For information or to register, visit folar.org/cleanup.