The Los Angeles Police Department’s cadet program helps youth ages 13 to 18 develop skills needed to succeed as adults through police training, interaction with officers and service to the community. At the Wilshire Division, where 60 to 70 young people on average are enrolled as cadets, the program has proven to be a big success, said Sgt. A.J. Kirby, the officer in charge of the division’s community relations office who oversees cadets. 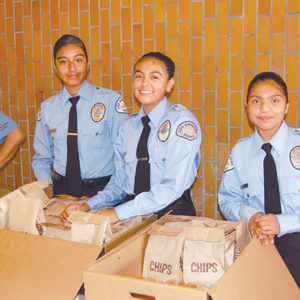 “We had one kid who was very shy when he started and didn’t want to talk to people. He got into the program, and next thing you know, he’s talking and showing interest in things. He got a job at Ralphs and now he’s a produce manager,” Kirby said. “It’s stories like those that show how important it is. It’s a leadership academy. We are trying to make future leaders.”

Kirby said while the cadet program is a critical citywide component of the department, each individual station must find ways to support it financially. The Los Angeles Police Foundation and private donors pay for essentials such as cadet uniforms and equipment, but officers must often fin donors or pay out of pocket for extracurricular activities, he said.

That’s where a new group known as the Wilshire Booster Association will come in, according to founders Joyce Kleifield and Mindy Lake, longtime residents of Beverly Grove and the Miracle Mile, respectively. Kleifield, who is executive director of the Harrison Trust, a support organization for Los Angeles High School, is in the process of getting the Wilshire Booster Association up and running and is looking for help. She and Lake are seeking board members and are working on getting the association designated as a nonprofit.

“We are trying to build support for things that are not in the city budget and want to support the cadet youth program,” Kleifield said. “It really is in the beginning stages. We met with [the captain] and he was saying there are many needs that station has that aren’t in the budget. We want to provide them.”

Kleifield, whose affinity for law enforcement stems from her brother serving with the Palm Springs Police Department, said there were similar support organizations for the Wilshire Division in the past, but they ended for a variety of reasons. She partnered on the project with Lake, a 30-year Miracle Mile resident and community relations officer for Metro working on the Purple Line Extension, because of her community involvement. Lake said she has had a long relationship with personnel at the police station, having started the first neighborhood watch along Sixth Street decades ago and serving on the Wilshire Division’s Community Police Advisory Board in the late 1990s. With her knowledge about the department and Kleifield’s experience organizing and fundraising, she said the Wilshire Booster Association has potential.

“It’s a grassroots effort and we want to get local people involved,” Lake said.

Kirby said he is confident the Wilshire Booster Association will make a difference and is excited to see it coming to fruition.

“Bottom line is, we don’t have the funding for the cadet program. It has always been privately funded,” Kirby added. “We need these donations to keep it going.”

Capt. Tim Nordquist, who will become commanding officer of the Wilshire Division on May 12, said he also supports the Wilshire Booster Association and plans to work with Kleifield and Lake to make it a success.

“I have seen booster associations like this be very beneficial,” Nordquist added. “Even if it is a little thing like we want to have a community meeting and want to invite a speaker and serve refreshments or even serve a small meal, that is something that is not in the budget. That is the kind of thing that the booster association can do. I really see it as an important thing.”

Kleifield encouraged anyone who is interested in helping or joining the booster association’s board to email her at joyce@kleifield.com.

“We are very excited,” she added. “We will be reaching out to the community and I am hoping we can put this together in the next six months.”