Cypress Hill, the Grammy-nominated hip-hop group best known for the 1994 song “Insane in the Brain,” received a star on the Hollywood Walk of Fame on April 18. 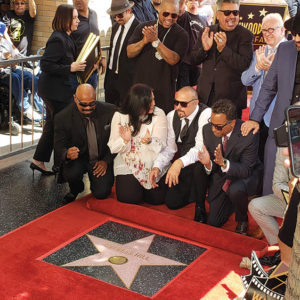 Cypress Hill, the hip-hop trailblazers, were honored with a star on the Hollywood Walk of Fame on April 18. (photo by Cameron Kiszla)

The group – comprised of Senen “Sen Dog” Reyes, Louis “B-Real” Freese, Lawrence “DJ Muggs” Muggerud and Eric “Bobo” Correa – emerged out of South Gate in the late 1980s and found mainstream success in the early 1990s with a string of three platinum albums, including the triple platinum “Black Sunday.” Cypress Hill has sold more than 18 million albums, and their influence in hip-hop goes further than the numbers would indicate, said fellow rapper Xzibit, who lauded the group during the ceremony.

“You are our Rolling Stones, our Grateful Dead. You are the West Coast Public Enemy. You’ve stood the test of time,” Xzibit said.

Comedian George Lopez, who was awarded a star on the Walk of Fame in 2006, said of the more than 2,600 stars, none are more important than the one awarded to Cypress Hill, the first Latino hip-hop group to be honored.

When they took the stage, the band members thanked fans, family and friends – including notable musicians like Everlast of House of Pain, Chuck D of Public Enemy, and Tom Morello of Rage Against the Machine – who came out to celebrate.

“We want to thank our friends around the world and most especially right here at home base, Los Angeles, California,” B-Real said.

Los Angeles City Councilman Mitch O’Farrell, 13th District, was on hand to celebrate the group, which he credited with having a positive impact on the local community through charitable work. O’Farrell said he also enjoys the hip-hop band’s music.