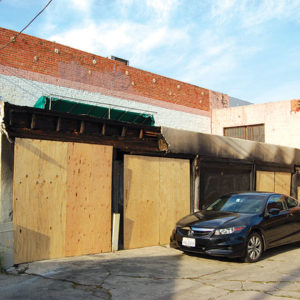 Firefighters quickly extinguished a blaze that erupted in a row of garages off an alley in the 500 block of South Fairfax Avenue on April 12. The fire was reported at 6:27 p.m. and firefighters arrived to find smoke and flames coming from the garages, which are located behind businesses along the west side of Fairfax Avenue, just north of Sixth Street. The flames were extinguished in 16 minutes. Employees of a nearby pet store, Mr. Speck’s Playhouse, started evacuating patrons and animals when firefighters arrived, but the blaze was extinguished and they were soon allowed to return. No injuries were reported and the fire was contained to the row of garages. The cause is under investigation and no loss or damage estimate was available.