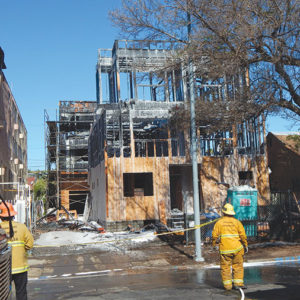 A 26-year-old man was sentenced on April 16 to four years in state prison after pleading no contest to setting a fire at an apartment complex that was being built in east Hollywood in 2017.

Benicio Garcia entered a no contest plea to two counts of arson of a structure and was immediately sentenced. On June 12, 2017, a fire was reported at an apartment building under construction in the 400 block of North Heliotrope Drive. The blaze destroyed the complex and two other nearby structures were damaged.

Besides Garcia, who was described a transient, no one was inside the building when the fire started. One firefighter was injured.

Witnesses saw Garcia outside the building during the blaze and notified authorities. He was arrested at the scene.