West Hollywood Councilman John D’Amico will continue serving as the city’s mayor, and Councilwoman Lindsey Horvath will serve as mayor pro tempore, following the City Council’s vote on April 15. They will be installed at the May 20 council meeting. 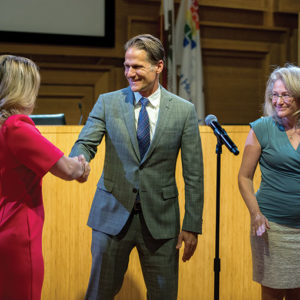 West Hollywood John D’Amico, pictured earlier this month with Councilwomen Lindsey Horvath (left) and Lauren Meister when they were sworn in to their new terms, was elected mayor by his colleagues. (photo by John Viscott/courtesy of the city of West Hollywood)

D’Amico and Horvath have held those titles since March 4, when Councilman John Duran stepped down as mayor due to health concerns, while also facing backlash from sexual harassment allegations against him by Gay Men’s Chorus members. Monday’s vote was the regularly scheduled vote to select mayor and mayor pro tem.

D’Amico, first elected to the City Council in 2011 and elected to his third term on the council last month, is serving his second one-year term as mayor, a mostly ceremonial title that rotates among the five council members.

“The best version is when the five of us are working together to move the city forward,” said D’Amico, who has lived in West Hollywood for more than 25 years.

The ongoing effort to finalize the plans and fund a possible Metro extension through the city will be one of the top issues facing the council in the next year. D’Amico also said he wants to bolster the city’s human services.

The council voted to keep its annual mayoral term from May to May every year as the city transitions to new a new election cycle that coincides with the county. The city was in the process of changing the installation ceremony to January after each November election, but city staff instead recommended that they keep it in May. If a sitting mayor or mayor pro tempore is up for reelection and loses, council members would have to elect a replacement for the months leading up to the May installation.

West Hollywood has traditionally held its elections in March of odd-numbered years, but will switch to November of even-numbered years beginning in 2020 to comply with new state law designed to increase turnout.

D’Amico said one of the themes of his speech will be that everyone in the community is mayor.