On Jan. 22, the Crossroads Hollywood project, which aims to bring nine buildings, 950 apartments, 308 hotel rooms and 190,000 square feet of commercial space to the area around the Crossroads of the World at 6671 Sunset Blvd., passed the Los Angeles City Council by a vote of 13-0. An initial vote was held that same day and passed 15-0, but following further public comment, City Attorney Mike Feuer called for a second vote, for which Councilmen Mitch O’Farrell, 13th District, and Curren Price, 9th District, were absent. 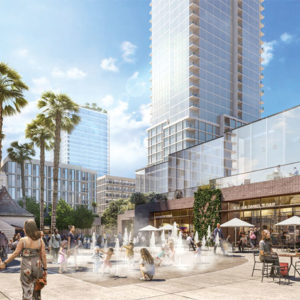 Though it had overwhelming support, not everyone is a fan of the project.

On a mid-March morning, Jill Stewart, executive director of the Coalition to Preserve LA and an advocate for banning developer campaign contributions to Los Angeles City Council members, railed against the development as she stood outside O’Farrell’s Sunset Boulevard office with a handful of Coalition supporters; Matthew Strugar, an attorney representing the organization; and a large cutout of a rat.

Stewart, an activist who also helped lead the charge to support Measure S, the failed proposal from 2017 that sought a two-year moratorium on new projects that would require a zoning change, said the Crossroads project would displace more than 100 residents in the nearby Selma Las Palmas Apartments. The complex would be demolished to make room for the new buildings.

Stewart said the rat was meant to represent O’Farrell, whom Stewart said took money from Harridge Development Group, the company behind the project. Campaign contribution records show in 2013, Harridge CEO David Schwartzman donated $1,900 to O’Farrell’s campaign and officeholder account, and Harridge CFO Brad Woomer donated $500. Schwartzman, Woomer and other Harridge executives have also donated to many other candidates for city offices in 2013 and other years, according to campaign contribution records. Total contributions from Harridge and people who listed Harridge as their employer total $23,350 since 2011.

Tony Arranaga, O’Farrell’s spokesman, said the contributions did not sway the councilman’s votes.

“The councilmember’s position on the project has been clear through the entire Council committee process.  He supports the project, and he would’ve voted to approve the item on the second go around as well,” Arranaga said.

In addition, O’Farrell helped negotiate a deal to ensure the tenants of the Selma Las Palmas Apartments could move back in once the project is done, Arranaga said.

“Tenants’ rents will be the same rent they are paying plus additional increases permitted by the Rent Stabilization Ordinance. This is in line with rents they could reasonably be expected to pay had they remained at the site. The tenants will receive monetary compensation, as applicable by law, for having to relocate out of their units while the project is being constructed,” he said.

Stewart, however, disagreed and said Price’s wife, Del Richardson, and her company, Del Richardson & Associates, “pressured [residents of the existing apartments on the site] to take pitiful ‘cash for keys’ buyouts” from the developer.

Susan Hunter, a community organizer with the Coalition to Preserve LA and a case worker with the Los Angeles Tenants Union, said those buyouts have been as low as $200 discounts off rent for four months, or $800 total, which is well below what the residents should be given in accordance with Los Angeles law. The Los Angeles Housing and Community Investment Department said such buyouts range from $8,200 to $20,450. A public records request was submitted for the documents that are submitted to the city when such buyout deals are reached, but the documents had not been received by press time.

In response to those accusations, DRA’s attorney, Clifton Albright of Albright, Yee & Schmit, sent the Coalition to Preserve LA a cease and desist letter last year.

Matthew Strugar, an attorney who is representing the Coalition to Preserve LA, said the cease and desist letter is intended to stifle the activists’ speech as part of a strategic lawsuit against public participation, or SLAPP. SLAPPs aren’t intended to be won, the lawyer said, but they tie up activists in a legal battle and drain their funds through attorney fees. Strugar said the state has laws against such moves.

“California has one of the nation’s highest protections against bogus lawsuits aimed at intimidating activists, organizers and other working people who raise their voices to fight for justice,” Strugar said.

However, Albright, Richardson and DRA employee Andre Augustine dispute many of the claims made by the coalition, and Albright said the letter was only intended to curb what he said were false statements.

“We are in no way trying to silence them. At the same time, DRA is not going to be slandered and not respond,” he said.

For instance, Augustine said the offers for tenants to move out typically range from $8,500 to more than $20,000, far higher than what the coalition alleges. The $800 number is “categorically false,” Albright said, and $8,500 is the absolute minimum a tenant would be offered.

“It’s such a gross discrepancy that I had an issue with it,” Albright said.

Richardson said her company was hired to provide “relocation assistance and advisory services” to the people living in apartments that will be torn down due to the development, and she said DRA will negotiate “as much as possible” on the tenants’ behalf.

“We’re the type of company a developer hires because we care. Most people who hire us know we’re pro-tenant. We care about the people we work with,” Richardson said.

Hunter also alleged that DRA held events to encourage renters to take the buyout money and invest it in a home they wouldn’t be able to afford, that they had tenants sign documents that weren’t in their primary language, and that the documents contained a nondisclosure agreement that prohibits those who sign it from discussing how much they received with other tenants.

Albright said “educational meetings” were held to show the tenants the programs available for first-time home buyers. Augustine said all tenants spoke either English or Spanish and could use the forms available on hand.

While it’s not a nondisclosure agreement, Augustine said a portion of the buyout document states neither side will discuss the arrangement, but that’s to protect tenant privacy, he said.

The privacy wording has never been used to silence a tenant, Albright added.

Despite DRA’s efforts, not all of the tenants at Selma Las Palmas Apartments have yet agreed to move out, and some have joined together to form the Crossroads Tenants Association. Their attorney, Amanda Seward, said she represents approximately 40 households.

She’s currently in negotiations with the attorney representing Harridge Development Group, Kyndra Joy Casper of DLA Piper Global, about securing the tenants’ right to return to the new buildings once they’re done and finding a temporary home for them while the project is under construction.

“We’re still working with them and moving forward to come to an agreement,” Casper said.

Seward said negotiations have been going on for about a month and she hopes to have it done within the next month or so.

“We’re hopeful and they’re making the right gestures, but obviously we need to see the details and get it negotiated and enforceable,” she said.

A show as sweet as candy

Please don’t refer to Jill Stewart as an “activist.” She is a highly paid PR person employed by Michael Weinstein and the AIDS Healthcare Foundation. I always thought the word activist refers to someone with more altruistic values for a common good, not someone paid hansomeley carrying the torch for another’s personal vendettas.

[…] up to predatory developers: Luxury-housing developers often steamroll over tenants in buildings they want to redevelop. In Los Angeles, Housing Is A Human Right helped tenants stand up to […]