The Los Angeles City Council’s public works committee approved a report on April 17 that could pave the way for repairs to concrete streets in Hancock Park and other neighborhoods throughout the city. 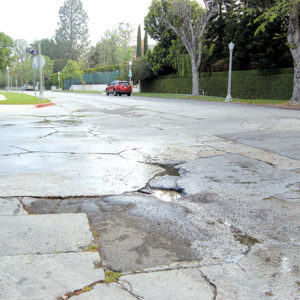 The report, which must still be approved by the full City Council, is one step toward restoring concrete streets in various states of disrepair. Compiled by the city administrative officer and the chief legislative analyst with the assistance of the bureaus of Engineering, Streets Services and Contract Administration, the report outlines the scope of street repairs and prioritizes repairs to the most damaged sections.

Councilman David Ryu, 4th District, led the effort to study concrete street repair and identify ways to complete the work. The full City Council’s approval will likely come before the summer recess in July, Ryu spokesman Mark Pampanin said. After that, the city will identify individual streets in need of repairs and the costs, which will likely be ready this fall.

“Fixing our concrete streets has been a priority of mine since I entered office,” Ryu said. “After decades of neglect, our city’s concrete streets are one step closer to the repair plan they deserve.”

The city has not funded dedicated programs for concrete street repairs and reconstruction, but has completed or approved work on some streets on an individual basis in different parts of the city. For those projects, funding has been allocated on an ad hoc basis, according to the report.

Some concrete street repair is currently occurring in Hancock Park near Second Street and McCadden Place, Fourth Street and Rimpau Boulevard, June and Fourth streets, and the 300 block of South Las Palmas Avenue. Ryu orchestrated those repairs with the Bureau of Street Services and the first phase is expected to be complete by June.

“Despite budget limitations, I have long believed that we can find a way to fix our concrete streets in a timely and cost-effective way,” Ryu said. “Just a few weeks ago, we began targeted concrete street repair in Hancock Park, and with this report, I look forward to many more.”