One month into a new pilot program, the city of Los Angeles received 335 complaints from residents through 311 regarding electric scooters and shared mobility devices. 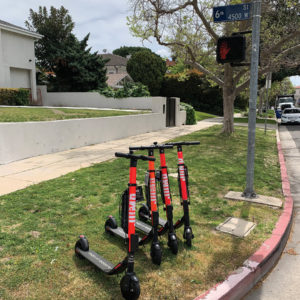 Scooters are required to be parked upright and within sidewalk furniture zones, such as the ones depicted. There are designated parking zones in downtown L.A., and more could be coming as communities adapt to the new devices. (photo by Karen Villalpando)

The electric scooters that quickly permeated the streets throughout L.A. County have been polarizing among local residents. Some view them as a significant step toward reducing carbon emissions, and others worry about the public safety risks, as well as devices left in public-rights of way and private property. It’s also been a divisive issue among L.A. City Council members. Councilman Mike Bonin, whose district includes Venice Beach, where the devices have been especially popular, has been an avid supporter. Mark Pampanin, a spokesman for Councilman David Ryu, 4th District, said the councilman wants “this new mobility option to grow safely and sustainably, and help get Los Angeles moving again.”

“Our team hears from residents from time to time with issues about a scooter here and there, but it’s a relatively low number,” Pampanin said via email. “We’re pleased to see that, at least so far, the pilot rollout, requirements on operators, and numerous community meetings held by LADOT have done a lot to understand and address community concerns.”

Tony Arranga, spokesman for Councilman Mitch O’Farrell, 13th District, said the CD13 office receives some complaints, but “it’s clear there is a market for this mode of transportation.”

Other council members haven’t been as confident, but Councilman Paul Koretz’s call last summer for a citywide ban did not gain much traction with his colleagues.

With the shared mobility craze still in its nascent stages, data on the injuries riders cause to themselves and others is scarce. But last summer, a Cedars-Sinai doctor said the hospital was seeing injuries on a daily basis, including one or two cases that require urgent surgery once or twice per week.

A study released earlier this year by researchers from organizations including UCLA, Stanford and the Greater Los Angeles Healthcare System evaluated 249 patients who suffered injuries from scooters in Southern California between September 2017 and August 2018. Approximately 40% had head injuries, 32% had fractures and 28% had soft tissue injuries. Only 4.4% wore helmets.

At the beginning of March, Councilman Gil Cedillo introduced a motion asking to have them banned from his district, which includes Westlake, Angelino Heights, Chinatown and Pico Union.

“Many cities are struggling with scooters that are haphazardly parked along sidewalks and parkways, thereby obstructing access for pedestrians and people in wheelchairs,” his motion stated. “Hopefully, all of the electric scooter companies abide by the LADOT rules and regulations and the city’s pilot program will operate smoothly.”