U.S. Rep. Tony Cardenas (D-Panorama City) introduced a resolution in the House of Representatives recognizing the late César Chávez. This resolution honors the life of the labor leader who organized migrant and farm laborers in the western United States. 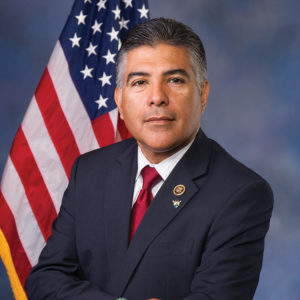 Cardenas, whose father came to America to work as a farm laborer, said he is thankful for the 70 colleagues in Congress who support the bill. (photo courtesy of the 29th Congressional District of California)

“I am thankful that 70 of my colleagues in Congress have committed to support this bill, and will advocate for its passage in the people’s house,” Cardenas said.

Cardenas’ father came to this country to work as a farm laborer, and his parents worked hard to support the family. Chávez fought for respect and human rights for all workers, regardless of how humble their job was. César Chávez once said, “We cannot seek achievement for ourselves and forget about the progress and prosperity for our community.”

“That’s what I work to do every day to make sure my constituents and all Americans have access to the American Dream,” Cardenas said.

Chávez is perhaps best known for founding the National Farm Workers Association, which became the United Farm Workers of America. In 1994, Chávez was posthumously awarded the Presidential Medal of Freedom. In 2012, President Barack Obama declared March 31, Chávez’s birthday, as César Chávez Day and, later that year, directed the secretary of the interior to establish a César Chávez National Monument in Keene, California.

Cárdenas’ legislation recognizes the accomplishments and example set by Chávez, pledges to promote Chávez’s legacy, encourages the people of the United States to commemorate that legacy and honors Chávez’s famous rallying cry, “Sí se puede!” Spanish for “Yes, we can!”