Beverly Hills Cannabis Club founder Cheryl Shuman said she turned to cannabis as “a last resort” after she was diagnosed with ovarian cancer more than 10 years ago. Since then, she’s been called “the First Lady of Cannabis” and “the Martha Stewart of Marijuana” for promoting the plant’s medicinal benefits. 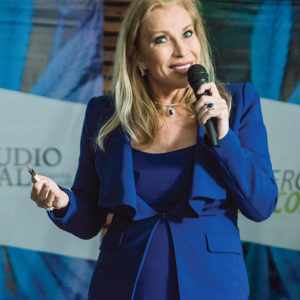 Shuman attributes cannabus to helping her in her battle with cancer. (photo from Facebook)

But with cannabis still illegal at the federal level and research about its possible medical benefits lagging, she’s also faced plenty of criticism.

“Sometimes to make a difference you have to face the battle,” said Schuman, who served as the moderator at the State of Cannabiz expo on April 13 at the Los Angeles Convention Center, attended by businesses, advocacy groups and politicians.

The daylong event included panels on criminal justice, insurance, licensing and other issues that many new cannabis businesses are facing since Proposition 64 went into effect.

Panelists also discussed the stigma of using cannabis, which has been at the forefront of the federal government’s war on drugs, as medicine. Shuman said she at first felt that stigma, but, came to the realization that “this is medicine, it’s saving my life.” The medicinal and healing values of cannabis, and how they compare to the health risks, are inconclusive, according to the National Center for Complementary and Integrative Health, a U.S. government agency. Its status as a Schedule I drug has limited the research opportunities. Studies conducted so far have shown potential for cannabis usage to decrease opioid prescription rates and opioid deaths, according to the National Institute on Drug Abuse. 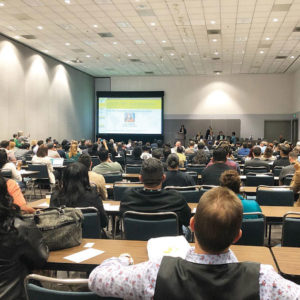 Shuman had been advocating for legalization in the years leading up to Proposition 64’s passage in the 2016 election. Although the Beverly Hills Cannabis Club bears the name of a city that has banned cannabis businesses from setting up shop within its borders, Shuman has served an upscale cannabis clientele. She’s gained media attention for elaborate cannabis-themed events, and for selling products such as $150,000 vape pens and cannabis cigars for $500 each. The cannabis she sells comes from a 68-acre marijuana farm in Northern California.

Shuman has spoken out mostly about legalization at the federal level, but her grassroots involvement includes time spent as the director of Beverly Hills NORML, the local chapter of a cannabis advocacy group. She also addressed the Los Angeles City Council in 2010 about laws preventing medical cannabis users from receiving organ transplants. Then-Gov. Jerry Brown signed a law in 2015 to end that type of discrimination.

Beverly Hills city spokesman Keith Sterling said the city has not been engaged with Shuman or the groups she’s involved with over cannabis policy, according to the city’s legal team.

The keynote speaker at Cannabiz, U.S. Rep. Tulsi Gabbard (D-Hawaii), discussed a bill she introduced to remove cannabis from the federal government’s scheduled list of controlled substances. The bill is unlikely to pass, but the 25 cosponsors, including three Republicans, underscore the growing momentum for legalization. A separate bill she introduced with U.S. Rep. Don Young (R-Alaska), the Marijuana Data Collection Act of 2019, would analyze revenues, public health, substance abuse, criminal justice and other data from states that have legalized recreational or medical cannabis.

“We have to address the fact that far too many people’s freedoms have been taken away for far too long because of this federal prohibition on marijuana, and because of this failed war on drugs,” said Gabbard, a 2020 presidential candidate. “The fact that marijuana, something that is not even in the same category as alcohol or tobacco, is still illegal in this country is unacceptable.”