Guests mingled with zoo keepers, viewed Asian elephants during their morning feeding and enjoyed food and beverages from some of L.A.’s top restaurants at a preview on April 11 for the upcoming Beastly Ball, an annual fundraiser for the Los Angeles Zoo on Saturday, May 18. 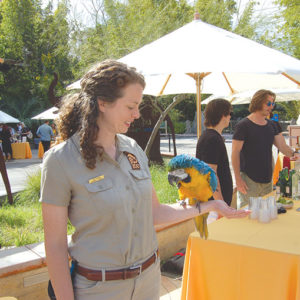 Zookeepers displayed animals from the zoo during a preview for the “Beastly Ball,” including a blue and gold macaw named Oscar. (photo by Edwin Folven)

The Beastly Ball, which is held by the Greater Los Angeles Zoo Association, is critical to the zoo’s mission of animal conservation and habitat preservation for some of the world’s most rare and vulnerable species. The star-studded event brings together celebrities, industry executives, city officials and supporters for a night of food, fun and fundraising. Marine biologist, explorer, author and lecturer Dr. Sylvia Earle will be the special honoree.

“Each year, we honor a dedicated conservationist, and Dr. Earle rose to the top of our list for her work in protecting the world’s oceans, which is so vital to the long-term ecological benefit of people, animals and nature,” Los Angeles Zoo Trustee and Beastly Ball Chair Tyler K. Kelley said. “Dr. Earle’s lauded career as an oceanographer has had tremendous impact on our planet for both current and future generations, and we are thrilled to honor her.”

Interim Zoo Director Denise Verret highlighted recent conservation efforts to help species threatened with extinction. She cited the release of 2,000 tadpoles at sites in the San Gabriel Mountains that had been decimated by wildfires, and the hand-rearing of a blue-throated macaw at the zoo’s avian conservation center.

“The Los Angeles Zoo, in partnership with GLAZA, is able to contribute to these efforts, and the Beastly Ball, which will take place on the heels of National Endangered Species Day, is going to be an opportunity to continue to raise money for our efforts, important efforts for conservation and saving wildlife not only in our own backyards, but across the world,” Verret said. “I appreciate everyone’s support and look forward to a very successful event.”

Additional honorees at the Beastly Ball will be Glen Curado, the inaugural Conservation Award recipient. Curado is Founder and CEO of World Harvest Charities and Family Services, which offers food programs focused on sustainability and zero waste of disadvantaged Los Angeles residents. He provides the Los Angeles Zoo with tens of thousands of dollars of free produce every month.

Former GLAZA President Connie Morgan will also be honored for her contributions during her 16-year tenure leading the nonprofit. Food Network star and chef/owner of Charm City Cakes Duff Goldman will serve as the inaugural curator of desserts.

The Beastly Ball also includes a silent auction with numerous unique items and experiences, such as a “Catalina Escape” and a four-night stay in a Queen EcoCasita at Playa Viva. Participating restaurants include Bottlefish, Celestino Ristorante, El Cholo, The Federal Bar, Kabuki Japanese Restaurants, Cocinas y Calaveras, El Coyote Mexican Café, Simmzy’s and Pink’s Famous Hot Dogs, among many others.

“We are always thrilled to be here. It’s a really special evening,” said Gloria Pink, who attended the preview event with her sister-in-law Beverly Pink.

“Be sure to bring your beastly appetite to Pink’s at the L.A. Zoo’s Beastly Ball,” added Richard Pink, who operates the stand with his wife Gloria and sister Beverly.

Individual tickets are $1,500. The Los Angeles Zoo is located at 5333 Zoo Drive. For information, visit beastlyball.lazoo.org.