‘Authors of the Future’ praised for creativity 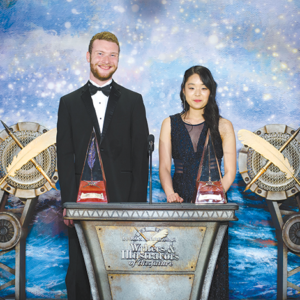 Grand prize winners Andrew Dykstal and Aliya Chen were recognized at the Writers of the Future ceremony in Hollywood. (photo courtesy of Author Services, Inc.)

“This year marks a historic milestone in our contests with simultaneous benchmark anniversaries, the 35th anniversary of our Writer’s Contest and, at the same time, the 30th anniversary of our Illustrators Contest,” said John Goodwin, president of Galaxy Press. “This year was also groundbreaking for another reason, in that, Aliya Chen made history becoming our first Chinese grand prize winner ever selected in either of our competitions.”

The awards show was held in the Grand Ballroom of the Taglyan Cultural Complex. The show opened with Sci-Fi Stomp and Body Percussion Dance featuring ROV-E, a Mars Rover Robot Prototype from NASA’s Jet Propulsion Laboratory, and dancers from EM Cirque. Awards for each of the quarterly finalists of the Writers and Illustrators Contests were presented by actors Kate Linder, Lee Purcell, Sean Cameron Michael, Ernest Pierce and Phil Proctor, along with renowned judges specializing in the science fiction and fantasy genres. For information, visit writersofthefuture.com and www.galaxypress.com.