After more than half a century, a late-night legend hangs up her apron

For decades, late-night diners of all makes and models have satisfied their cravings at Canter’s Deli, and for more nearly 55 years, Bella Haig was there. 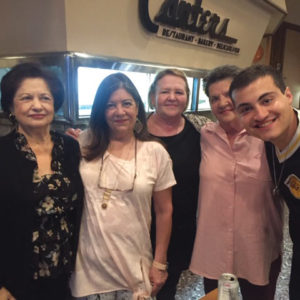 Haig started as a waitress, working the night shift so either she or her husband, Gordon, could watch their daughter Sheila and son William without having to hire a babysitter.

She had waited tables before, but Canter’s was a new challenge, she said.

“The menu was really big, and just as you got used to the prices, they’d change,” Haig said.

She soon got a handle on it and stuck around. After 20 years, she was named manager, and more than 30 years after that, retired at the age of 84, a legendary figure in the Los Angeles dining scene. Haig has been interviewed by local news outlets and played trivia on Jimmy Kimmel Live!

In a restaurant known as a celebrity hangout, she developed relationships with stars. She befriended Louie Anderson, who brought Haig and her family to Las Vegas for his shows, and took beers away from Rodney Dangerfield after 2 a.m. She’s waited on a veritable who’s who of the entertainment industry of yesteryear and today, from Paul Newman and Joanne Woodward to John Travolta, Brooke Shields and Jerry Seinfeld.

And though she’s not much of a sports fan, she served the royalty of athletics, from Muhammad Ali to members of the Lakers. She can’t remember which players came in, only that they’d have to duck their heads when they went to pay at the register.

Co-owner Jacqueline Canter said Haig even served Bono of U2, whose thick Irish accent she couldn’t understand. Haig just brought him a corned beef Reuben, which he loved so much he tipped her $150.

“She treated everyone like they were her family, but if they were celebrities, she’d do a little bit more to make sure they were treated like royalty,” Canter said.

Through it all, she’s become like family to the Canters, too. She’s been around to see four generations of the family walk through the doors, and she’s often invited to Canter weddings and bar mitzvahs.

“Bella took care of things like it was her own. We talked constantly about what was going on and any issues we had. She’d get our opinions and we’d get her opinion on things, like she was part of the family,” said Marc Canter, Jacqueline’s brother and a fellow co-owner.

Jacqueline Canter agreed and said Haig would even chase dine-and-dashers down the block over their unpaid checks.

“She treated the restaurant like it was her own,” she said.

But all good things must come to an end, and last month, Haig retired. Jacqueline Canter said they held a retirement party for her, and about 50 people came out to toast the woman who helped make Canter’s the legendary deli it is.

“It is never going to be the same without her because she put her heart and soul into it,” Jacqueline Canter said.

Masters of Taste takes the field at the Rose Bowl

When I was a little girl, Bella’s daughter, Sheila became my best friend when I moved to California. I will never forget how kind, hard working and devoted Bella was. Although I lost touch with Sheila when I moved back east again, it was always fun to be able to keep up with Bella when I saw her at Cantor’s. Hard to believe that I retired before Bella, Happy retirement!