With bills aimed at increasing housing density and affordability pending in the California Legislature, the city of West Hollywood is considering pilot programs to add to its affordable housing stock. 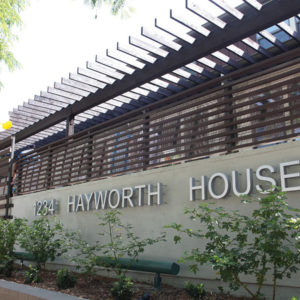 The city’s efforts to add to its affordable housing stock included the opening of Hayworth House in 2012. (photo by Joshua Barash)

Staff will return with a framework for those options, including the potential costs. Councilman John Heilman said small sites acquisition, with the possible addition of larger sites, has potential for the community.

“I wouldn’t limit it to necessarily small sites,” he said. “I think what we’re talking about is acquiring existing apartment buildings and preserving them with a mix of income levels within the apartment.”

The council also voted to take a neutral position on a housing bill that could impact development density and the city’s housing stock. SB 50, one of the most polarizing bills in the Legislature, passed its first committee on April 2. Introduced by state Sen. Scott Wiener (D-San Francisco), the bill would overrule local zoning laws and allow higher density projects to be built near transit and jobs.

Councilwoman Lauren Meister said “there is still a number of items that have not yet been resolved” in terms of how it will impact housing and development in West Hollywood.

Mayor John D’Amico said the bill would be “ringing the death bell” for the West Hollywood West neighborhood. A new Metro rail line could be added along San Vicente Boulevard, thus making it a more transit-rich area that would be subject to new zoning under the bill.

“We’re basically saying single family homes will not exist in West Hollywood if the train comes here and this bill passes in its current form,” he said. “ … I think having a single-family neighborhood with a height limit of two stories, I don’t think that that should be an automatic bad thing in California, not in a city like ours that achieves so much with so little land.”

Sen. Ben Allen (D-Santa Monica), Wiener’s colleague in the Senate, was opposed to SB 827, a similar bill introduced in 2018, which died in committee. A spokeswoman for Allen did not respond to a request for comment about Allen’s position on SB 50.

West Hollywood City staff said they will continue to pursue amendments to the bill that would limit the changes imposed on West Hollywood, which is already one of the most densely populated areas in the county.