Working on the rail in West Hollywood

West Hollywood is pushing for the Los Angeles County Metropolitan Transportation Authority to bring rail through the city and officials are encouraging the public to get involved on their own while the fate of a residents task force remains up in the air. 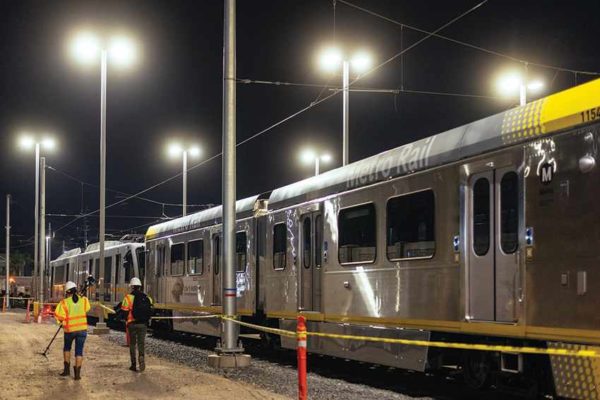 These light rail cars will be used on Metro’s Crenshaw/LAX Line. West Hollywood officials want a new light rail line that will connect the new Crenshaw/LAX line, which is expected to open next year, and the Red Line subway to go through the city. (photo courtesy of Metro)

On March 4, Mayor John D’Amico and Councilwoman Lauren Meister proposed a 15-resident task force that would provide feedback on what the people of West Hollywood wanted.

Under the proposed plan, each council member would choose three residents, one each from the western, central and eastern portions of the city, to serve on the group.

But two council members, Lindsey Horvath and John Heilman, expressed concerns about how the new group would serve a different purpose than the city’s transportation commission, West Hollywood Advocates for Metro Rail and other organizations.

“It’s not clear to me how this task force works with what already exists,” Horvath said.

Metro wants to build a light rail that will connect the Red Line subway to the light rail Crenshaw/LAX Line, and West Hollywood officials want that mass transportation to come to the city, which currently has no rail or subway service.

The new light rail line would allow passengers to transfer between several previously unconnected lines, including the light rail Expo line that connects Santa Monica to downtown Los Angeles. It is also expected to connect with the subway’s Purple Line Extension that will build seven stations between Koreatown and Westwood. Planned stops include the Miracle Mile and Beverly Hills.

Metro is considering five alignments for the light rail, four of which would come through West Hollywood, Hankamer said.

Over the course of the next year, Metro will pare down the options, she said, and now is the time for West Hollywood light rail supporters to make their voices heard and ensure their city is included because the environmental impact report could begin as early as next year.

“That’s where the project really becomes a real project, where the station locations are finalized, where the profile of the light rail [and] how many station entrances there are [will be decided]. All of those details, the technical details, they get studied during the EIR,” she said.

Metro didn’t expect to be done with this new light rail until 2047, though West Hollywood officials want that timeline moved up so construction could begin as early as next year. That could shave about 20 years off of the project’s timeline, Hankamer said.

To make that happen, West Hollywood would have to come up with 25 percent of the projects’ cost, which Hankamer said could add up to $550 million. The City Council voted in May to study how the money might be raised, which might include city funds, taxes, grants and public-private partnerships.

The potential cost to the city was one reason D’Amico said he wanted the task force.

“I just want to be sure that our residents know what they’re buying, want to buy it and then want to live with it once they’ve purchased it,” D’Amico said.

But whether the task force is created or not, residents can make their voices heard at four upcoming meetings to be hosted by Metro this month.

Hankamer said it’s important for West Hollywood residents to go to all of the meetings, learn as much as they can and provide feedback to Metro.

“If people want this project to happen before 2047, it’s really important to get engaged right now and tell Metro that they want it. This is either going to push us into the EIR or not,” Hankamer said.