Wilshire area residents are on the stump 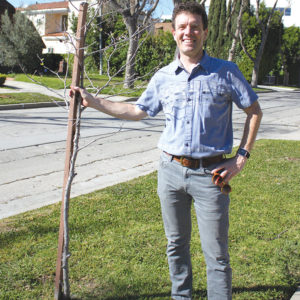 Conrad Starr, president of the Sycamore Square Neighborhood Association, posed with one of the new trees planted on Orange Drive, south of Wilshire Boulevard. (photo courtesy of Julie Stromberg)

Realizing stumps from dead trees were being left on city-owned land between sidewalks and roadways, and were preventing new trees from being planted because of space, Stromberg pitched an idea last year to the 4th District Council Office for a pilot project to remove stumps and have them replaced with new trees. The council office worked with the Urban Forestry Division to identify funding and this month, a year after Stromberg came up with the idea, approximately one dozen stumps were removed in the La Brea-Hancock neighborhood, located between La Brea and Highland avenues and Wilshire Boulevard and Third Street, and the Sycamore Square, located between La Brea and Highland avenues and Olympic and Wilshire boulevards. New trees were also planted at locations where it was feasible.

“I’m really, really happy,” said Stromberg, who also serves on the Community Forest Advisory Committee, an advisory panel for the Department of Public Works and the Urban Forestry Division. “This pilot project is going to really benefit the community.”

Stromberg said the project is a model that should be replicated in neighborhoods throughout the city. For La Brea-Hancock neighborhood resident Barbara Savage, the stump removal marked the end of a four-year period during which she was unable to plant a new tree in front of her residence.

“We had the drought situation … and my tree was one of the ones that the city claimed needed to come down. I came home one day and I had one less tree in front of my house, but they didn’t remove the stump, so I couldn’t replace that tree,” Savage said. “They should have removed it when they removed the tree. We’d have a four-year-old tree now.”

Savage said she is glad the stump has been finally removed and is pleased that the city took a proactive approach. Stromberg said Savage’s story illustrates a problem the program aims to address.

She looked for areas where there were multiple stumps, which would make removing them at one time more efficient. Stromberg also solicited locations from residents who knew where stumps could be removed.

Stromberg also obtained help from new Bureau of Street Services Director Adel Hagekhalil, who pledged his support. Stromberg added that a positive response from many residents in the neighborhoods where the stumps were recently removed show the program has potential.

Conrad Starr, president of the Sycamore Square Neighborhood Association and a member of the Greater Wilshire Neighborhood Council, supports the program.

“It was wonderful to learn Julie has teamed up with Council District 4 on stump removal. We villagers can water and rake, but it takes heavy equipment to get rid of some of these bigger stumps. Thankfully, the city and community have found a way to partner on the effort,” Starr added. “When Julie reached out to Sycamore Square leadership for a stump survey, I gladly took up the task on my bicycle. Just a few weeks later, not only had many of the stumps we identified been removed, but some had been replaced with new trees. Now it’s up to us to water and care for them, with continued help from the city. Our neighborhood is named after its sycamores because they provide shade, habitat and beauty.”

Ryu has previously praised Stromberg for her work in the community. The councilman recently named Stromberg as a woman of the year in the 4th Council District.

Stromberg added that she hopes the program will be expanded and will be working with Ryu’s Office and the Urban Forestry Division on further implementation.

“It’s going to be evaluated. We will see,” she said. “It could be very good for communities. It’s really important for community members to advocate for it.”

Lane closures on Mulholland due to scheduled DWP work