In the 1960s and 1970s, the Sunset Strip was known for its large billboards and tall wall signs that advertised the newest records from musicians who now fall into the classic rock category. Through the years, the content of those billboards changed – now advertisements encourage passersby to check out the newest television shows – but the allure remains for large outdoor advertisements in West Hollywood. 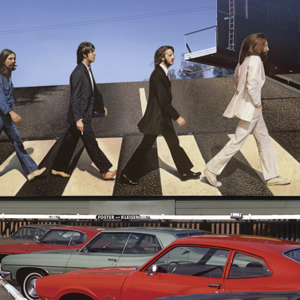 The Sunset Strip was once home to advertisements for many of the popular rock ‘n’ roll acts of the day. (photo by Robert Landau)

Along Sunset Boulevard, many of the billboards are static, meaning they only show one advertisement, but there may soon be more digital signs that can show multiple ads and serve the public good as well.

By doing so, the council “adopted the rules that will guide the future of advertising on the Strip,” said Bianca Siegl, long-range planning manager for the city. Up to 20 new billboards could come to the Strip over the next 15 years.

Though the billboards and tall wall signs can be static or digital, market trends show the new advertising spaces are likely to all be digital, Siegl said.

The billboards will also display civic announcements and art, moving and still imagery, 17.5 percent of the time.

“A lot of artists are now working in digital media, and we think this is a great opportunity to create almost an outdoor museum of digital art for people to enjoy while on the Strip,” Siegl said.

“It’s a win for the sign companies and the property owners, but it’s also a win for the community … Ultimately, this is a good compromise between the businesses and the city,” he said.

The exact amount of time the art and civic announcements will be shown was the subject of some disagreement during public comment, but everyone seemed to agree that the art will add to the atmosphere on the Sunset Strip. 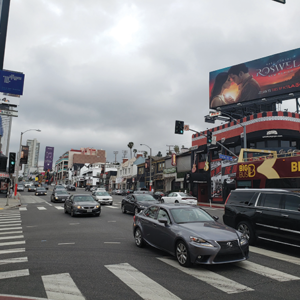 West Hollywood may start accepting applications for new billboards as soon as this summer. (photo by Cameron Kiszla)

“This would make West Hollywood a world leader in presenting digital artwork on this magnificent scale,” said Catherine Lee, who spoke during public comment.

The city plans to retain a curator to select the art that will be displayed and will host quarterly meetings with the billboard owners to get their input about the art that’s chosen. Then, the West Hollywood Arts and Cultural Affairs Commission will make the final decisions on which artwork will be shown and when it will be exhibited. The city will schedule the art a year in advance so billboard owners can have an idea of what will run alongside their advertisements.

Though the motion passed unanimously, several council members raised concerns, especially concerning the scoring system that will be developed to choose which billboards and wall signs will get brought to the council for the necessary approval.

Councilman John Duran said he wanted to be sure the scoring system rewarded creativity, not mediocrity, and Heilman and Mayor Pro Tem Lindsey Horvath said the applications that have already been filed should receive some sort of bonus to give them priority.

Some concerns were also raised about the digital displays themselves. Councilwoman Lauren Meister said she was worried that the light from digital billboards would adversely affect residents and businesses, such as hotels, where incoming light could cause problems.

Siegl said the next step will be for West Hollywood to decide how to score the criteria for applicants, and she said she expects a call for billboard project proposals to go out this summer.

The city will probably begin with about 12 billboards over the next couple of years, which will allow the city to see how the program is progressing and save some billboard space for future applicants, Siegl said.