On March 19, a contentious community meeting at the West Hollywood Library highlighted the public opposition to what some people say is an attempt to remove a piece of music history from West Hollywood. 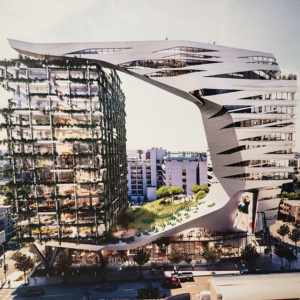 More than 50 people came to a meeting at the West Hollywood Library, many of them in opposition to plans by Silver Creek Development to tear down the Viper Room and the other businesses on its block of Sunset Boulevard. (rendering by Morphosis Architects)

West Hollywood-based Silver Creek Development has plans to tear down the Viper Room, which is known as a place to catch famous musicians in intimate shows and was once co-owned by Johnny Depp, and the other businesses on that block of Sunset Boulevard and build a hotel and apartment building in its place.

The 15-story structure by Morphosis Architects, which features one plant-adorned vertical tower and a crescent-shaped tower that join at the top and the bottom, will contain 115 hotel rooms, 31 market-rate residential units and 10 affordable housing units.

But a variety of concerns led more than 50 people to the library’s community room to address Jennifer Alkire and Doug Vu, senior planners for the city of West Hollywood, and four representatives of the development team.

A mix-up on the meeting’s start time led some in attendance to come at 6:30 p.m. instead of 5 p.m., further inflaming an already heated discussion, but the city officials and members of the development team stayed until everyone had a chance to ask questions.

Aside from one man who said he liked the idea of the project but wished the building was more energy efficient, the vast majority of people spoke out strongly against the structure, which many described as out of character with the other buildings on the Sunset Strip. One speaker called it “a particularly ugly building, a blight.”

Others raised concerns about increased traffic and what they perceived to be a glut of hotels in the tourist-friendly area of West Hollywood.

But one of the most common arguments was in defense of the Viper Room, a historic music venue that many felt would be a shame to tear down. 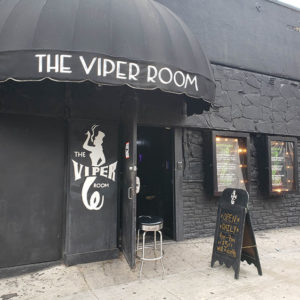 The development team said they planned to reopen the Viper Room inside the hotel, but multiple speakers, such as Viper Room employee Rita Fiora, said that wouldn’t be the same.

Fiora, who said she’s been with the Viper Room for 10 years, said the venue’s “gritty” nature is part of what makes it special, and while she could support renovations or improvements, the “stage is sacred.”

“People want to feel the history, they want to feel the vibe. It’s an experience. All the bands that come through there are really, really talented. You never know on any given night who’s going to go on that stage,” she said.

With the meeting winding down, many in attendance said they planned to oppose the project, which Alkire said was submitted to the city in December.

The public will next have a chance to get involved at the scoping meeting for the environmental impact report, which Alkire expects to take place sometime this summer, possibly as soon as late June. Nothing has been decided about the project yet, she said.

“This is entirely up to the City Council,” she said.

In the meantime, DJ Moore, a land use attorney with Latham and Watkins who spoke on behalf of the development team, said the developers will be listening to the community and the project could evolve over time like the Arts Club project.

“This is just the very beginning [of the public outreach],” Moore added.

First the one that looks like a stack of pancakes and now this one, where one tower leans on the other looking like a drunk being assisted to his Uber. Welcome to the Strip 2023!

The article omits the strong opposition to the helipad. The developer claims that the WEHO fire department requires one in buildings over a certain height, but this was lifted throughout Los Angeles in 2014. In fact, WEHO was one of the first to ease restrictions. https://www.dailynews.com/2014/09/29/los-angeles-no-longer-requires-helipads-on-buildings-allowing-for-bolder-skyscraper-designs/
The developer claims it will only be used in “emergencies” – fires or earthquakes….and that the FAA will penalize them for using it otherwise. Nonsense. The Los Angeles FAA allows helicopters to fly anytime of the day and night at any altitude – and, especially on the weekends – as anyone who lives in WeHo will attest to. Jennifer Alkire assured me that in the negotiating process with the fire department on other buildings, the helipad was usually taken out. I hope she follows through on this.

The requirement for a helipad is 12 stories. This is 15.

The developer and architect admit at the meetings that they do not even want to add a helipad because it is so expensive.