The city of West Hollywood has completed crosswalk safety improvements on Fountain Avenue at the intersections of Harper, Hayworth and Formosa avenues, Havenhurst Drive and Detroit Street. 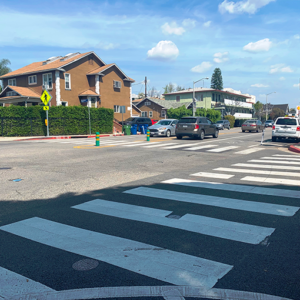 Safety improvements on Fountain Avenue include flashing lights at crosswalks that are activated by pedestrians. (photo courtesy of the city of West Hollywood)

High-visibility, striped crosswalks were painted at the intersections last October, and new flashing pedestrian warning lights were installed earlier in March. The new lights are activated by pedestrians to stop traffic on Fountain Avenue.

Diamond-shaped pedestrian warning signs and bright lights facing traffic have been embedded in the roadway, forming a visual line along the perimeter of each crosswalk. The lighting is also activated by pedestrians pushing buttons on curbside poles.

The new crosswalks feature small refuge islands in the center of the roadway. Additional safety features have also been added such as bulb-outs at intersection corners to reduce crossing distances, and right-turn-only signs to reduce potential conflict points. Trailer-mounted electronic message signs have been placed at key locations citywide to encourage drivers to slow down and observe posted speed limits. Speed radar feedback signs have also been installed near Sweetzer and Fairfax avenues, and Gardner and Detroit streets.

The city will evaluate the improvements at a later date to determine their effectiveness in reducing speeds and accident rates. Pending the results of a testing phase, the striped bulb-outs and refuge islands may be replaced with permanent concrete fixtures.

Law will change how transgender inmates are classified