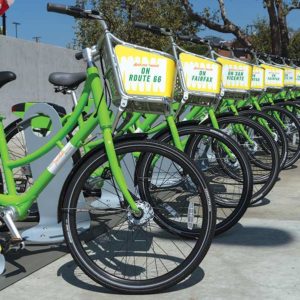 Despite some initial signs of growth after its first year, West Hollywood will end its current bike share program due to lagging ridership. (photo courtesy of Jon Viscott/city of West Hollywood)

An 18-month pilot program will be established. The council considers the program to be dockless, but bicycles would have to be returned to docking stations, locked at a rack, remain on private properties with owners’ consent or left in other designated areas to avoid bikes left askew on public rights of way. One company will be selected to operate the program, and bicycles will be available to users via smartphone app.

The city’s contract with CycleHop for operation of WeHo Pedals expires at the end of August, but the city can exercise a 30-day termination clause if the pilot program is ready to launch before then.

“I’m for getting rid of what we have now because we’re losing so much money on it, but I also think that we need to have infrastructure in place before we do anything,” said Councilwoman Lauren Meister, one of two votes against the proposal.

When the City Council voted to end WeHo Pedals, which operated on an approximately $200,000 deficit in its first year, a lack of bicycle lanes throughout the city was mentioned by council members as one of the obstacles. WeHo Pedals riders also struggled riding up West Hollywood’s hilly terrain, an issue the council hopes electric bicycles will solve.

Councilman John Duran was the other no vote. He said it’s unlikely that riders will return bicycles to designated areas. He also supported a Transportation Commission recommendation to include electric scooters in the pilot program. There is currently a citywide ban that prohibits scooter companies from leaving their devices within the city, with an exception for private property owners who choose to allow them.

“Enough time has passed by and it looks like, as a passing fad, that the novelty is wearing down,” Duran said. “But there are still people who are utilizing the scooters and I’d like to at least get an understanding through a pilot program of whether or not we can successfully regulate them, rather than a complete no.”

Since hitting the streets late in 2017, many Angelenos have embraced scooters as a first-mile/last-mile solution and for being environmentally friendly. But many other residents and local leaders have been worried about the safety concerns, including riders using the devices without helmets and on sidewalks within close proximity to pedestrians.

“Are we going to stop progress on a new industry that is not only here to stay but actually represents the solution, or at least a big part of a larger solution for mobility in Los Angeles and getting cars off the road?” Genevieve Morrill, president of the West Hollywood Chamber of Commerce, said about the scooters.

The council asked city staff to present an ordinance to ban bicycle riding on sidewalks while they’re in electric mode, and options for a possible city subsidy of the program.