With the unofficial results in for all nine precincts in West Hollywood’s March 5 election, hospitality workers union Unite Here Local 11 has fallen short in its efforts to unseat an incumbent councilman and overturn approval of the Arts Club project on the Sunset Strip. 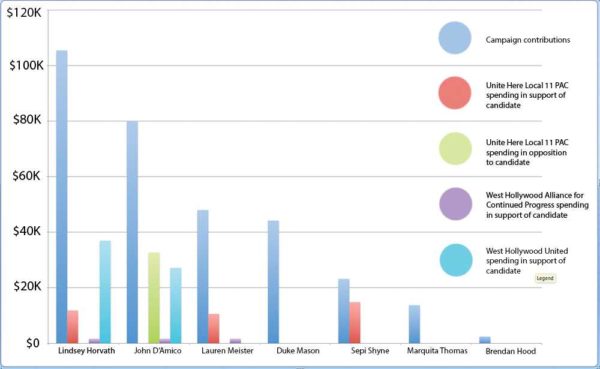 Through its political action committee, the union spent $34,904 in opposition to two-term incumbent Councilman John D’Amico, citing votes he made on a 2016 minimum wage increase and a short-term rental issue at 8500 Sunset Blvd. last year that it disagrees with.

D’Amico was the only one of the 11 candidates who faced expenditures in opposition to his candidacy by any of the four political action committees that spent money in the council race, campaign finance disclosures show. With approximately $80,000 raised, he was also bolstered by more campaign contributions than any of the candidates except incumbent Councilwoman Lindsey Horvath.

The Unite Here Local 11 PAC also spent a combined $40,898 in support of Horvath, incumbent Councilwoman Lauren Meister and challenger Sepi Shyne, an attorney and member of the city’s Lesbian and Gay Advisory Board. Totals are based on disclosures filed with the West Hollywood city clerk for spending within 90 days of the election.

All three incumbents won new terms, according to the unofficial vote count from the county clerk, with Shyne finishing fourth by about 250 votes in the three-seat race. Unite Here spokeswoman Maria Hernandez said the union is “proud of the role of our members in this election,” referring to the two incumbents they supported who won, and despite falling short in its campaign against Measure B, which would have overturned City Council approval of the Arts Club.

“We are not supporting John D’Amico because he voted against raising the minimum wage,” said the Unite Here statement, issued the day before the election. “We have union members who live in the city of WeHo and who have trouble paying the high rents month to month. We also have members who work in the city but cannot afford to live here due to the high rent costs.”

In March 2016, the West Hollywood City Council considered implementing a $15 minimum wage. Concerned about potential adverse effects on the city’s businesses and rising costs for residents on fixed incomes, D’Amico introduced a motion for a $12 minimum wage that passed 3-2. Meister also voted in favor of $12. Horvath, who supported $15, was one of the no votes. State law now requires cities to gradually increase their minimum wages each year until it gets to $15 in 2022 for employers with at least 26 employees, and for all employers in 2023. Some cities, including Los Angeles, are raising their minimum wages to $15 ahead of the state-mandated schedule, and others have already done so, like San Francisco.

Another D’Amico vote that Unite Here took issue with came last September, when the West Hollywood City Council voted 3-2 to prevent the operator of AKA West Hollywood, at 8500 Sunset Blvd., from renting its luxury units on a short-term basis on the grounds that short-term rentals were in violation of the development agreement. D’Amico was one of the two votes in favor of allowing the short-term rentals. He said the long-term availability of the property’s luxury units would have no bearing on residents who struggle to afford housing.

But three council members, including Meister, said they were concerned that allowing the short-term rentals to continue would undermine the city’s housing stock and possibly set a precedent for future development. Hernandez, the Unite Here spokeswoman, said via email that it was tantamount to D’Amico voting “for a corporate rental company when Lauren Meister voted to protect housing.”

For each expenditure they make, political action committees have to declare which candidate or ballot measure they’re spending money on, and whether it’s in support or opposition. The committees aren’t affiliated with any campaigns. Meister said she was “not happy there was a negative campaign” against D’Amico.

“It was very disconcerting to watch that,” she said.

Unite Here and its members also opposed the Arts Club project, criticizing the council for focusing more on luxury development than on adding affordable housing. But a Unite Here-initiated referendum fell short, with more than 60 percent of voters passing Measure B to uphold the City Council’s approval of the project.