Metro has announced the hours for hauling from the South La Brea staging yard as part of the Purple Line Extension project have been extended to remove soil excavated by two tunnel boring machines currently digging under Wilshire Boulevard. 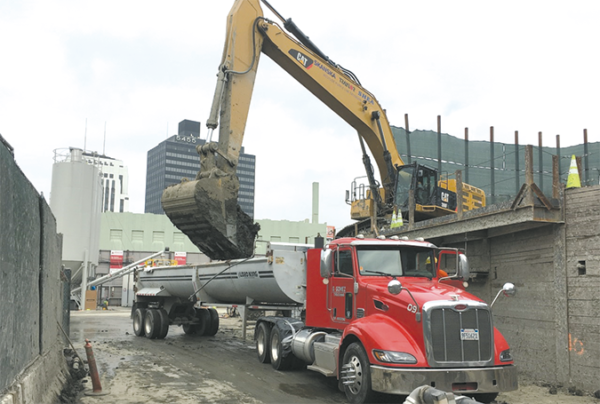 Hauling hours will be from 6 a.m. to 4 p.m., and 7 p.m. to 2 a.m., as tunneling progresses toward Wilshire/Western. The machines are anticipated to reach the Purple Line Extension’s current terminus at Wilshire/Western this summer.

Purple Line Extension project work is also progressing at other locations on Wilshire Boulevard, including along Section 2 of the project from La Cienega Boulevard to Century City. A temporary bus layover station is being constructed in the median on Santa Monica Boulevard between Avenue of the Stars and Century Park East, with completion anticipated in late-April.

In Beverly Hills, construction of a 20-foot sound wall is anticipated to be completed mid-March around the Wilshire/Reeves staging yard at 9430 Wilshire Blvd. Potholing is also ongoing around the staging yard, which is near the future Wilshire/Rodeo subway station, to determine if there are any underground obstructions such as utility wires and pipes. All work will be completed during non-peak traffic periods. Lane closures and turn restrictions will be required, with two eastbound and westbound lanes maintained on Wilshire Boulevard.

Details on all Beverly Hills subway construction will be provided at a meeting on Wednesday, March 13, from 6:30 to 8 p.m. in the second floor municipal gallery at Beverly Hills City Hall, 455 N. Rexford Drive.

For questions and concerns, call the 24-hour project hotline at (213)922-6934, email the project team at purplelineext@metro.net or visit metro.net.