Nearly three years ago when Metro started digging to create new subway stations along Wilshire Boulevard at La Brea and Fairfax avenues, and La Cienega Boulevard, it was predicted a multitude of fossils would be unearthed given the route’s proximity to the La Brea Tar Pits. 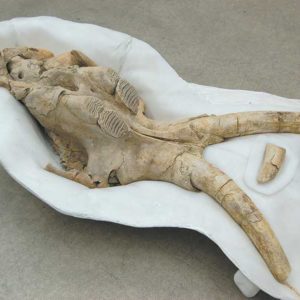 A mammoth’s skull is among the most significant fossil discoveries during excavation for the Purple Line Extension subway project. (photo by Edwin Folven)

That prediction proved correct, as crews have found more the 500 fossils from numerous Ice Age animals that lived in the region 10,000 to 15,000 years ago. What surprised paleontologists who monitor the digging, however, was where the fossils were found. Although the site of the future Fairfax Avenue subway station is closest to the Tar Pits, more specimens were collected at the Wilshire/La Brea and Wilshire/La Cienega station sites, with the latter being the “mother lode,” said Ashley Leger, paleontological field director with Cogstone Resource Management, a company overseeing fossil collection and preservation on the Purple Line Extension project.

“The La Brea station was first and we did find some significant fossils. We found the mammoth and mastodon material and we found a beautiful camel ulna (forelimb bone),” Leger said. “After La Brea, we went to the Fairfax Station, which is the station closest to the Tar Pits and where we anticipated finding the most fossils. It is where we found the least, which is Mother Nature’s cruel joke. Then we went to the La Cienega station and that’s when the flood gates opened. La Cienega has been a treasure trove.”

Fossils unearthed at the Wilshire/La Cienega site include bones from common herbivores such as horses, bison and camels, as well as eight giant ground sloths – rare outside of the Tar Pits and the immediate surrounding area. A complete fossilized pelvis was found from one of the giant sloths, prompting scientists to nickname the animal it came from “Shakira” after the singer known for hip-swaying dance moves.

“We finding everything you can imagine from the Ice Age,” Leger added. “We’re finding horses, bison, two different species of ground sloth, mammoths, mastodons, camels, dire wolves and saber-toothed cats. We have found hundreds of fossils. It’s been incredible.”

Leger said it is not known why so many fossils were found at the Wilshire/La Cienega site compared to the other sites but surmised it is the area’s topography.

John Harris, former chief curator for the La Brea Tar Pits and Museum, retired in 2015 at the end of a 34-year career and is now a Cogstone employee supervising the fossil recovery. He said the varying topography and geological conditions in the area likely led to the diversity in species being found at different locations. At the Tar Pits, animals such as horses, bison and camels are believed to have gathered to drink water that settled on top of the tar and became stuck. Predatory animals like dire wolves and saber-toothed cats preyed on the vulnerable creatures and also became stuck. Eventually, all of them ended up fossilized in the tar. The fossils found at the Wilshire/Fairfax station site mirror those found in the Tar Pits, including many wolves and saber-toothed cats.

Near Wilshire/La Brea, which scientists believe was a river-like area, and Wilshire/La Cienega, a swamp, larger groups of different types of animals likely gathered to drink. When they died for various reasons, their fossils were preserved in larger numbers. Near the La Brea Avenue construction site, crews found a complete mammoth skull and other mammoth and mastodon fossils, indicating it was an area frequented by large herds.

“There are some very interesting fossils. You’ve seen the relatively complete mammoth skull, which is beautiful, and nicely preserved bison and ground sloth material,” Harris said. “One of the most interesting things is now they are digging deep enough to get marine fossils, and we found some whale bones, which are common around here, but also some sea otter bones, and fossilized sea otters are very rare.”

The fossils found during subway construction are being cleaned and processed by Cogstone and will be studied by scientists with the Tar Pits and the Natural History Museum of Los Angeles County. In addition to providing a better understanding of animals that lived in the area, they will reveal clues about climate conditions and other factors that may have led to changes over thousands of years, Harris said.

“It’s incredible to think that in addition to its museums and cultural destinations, mid-Wilshire is also an active paleontology site,” said Dr. Lori Bettison-Varga, president and director of the Natural History Museum of Los Angeles County. “Our partnership with Cogstone and Metro ensures that the fossils discovered at the three Purple Line sites will be protected for scientists now and into the future. We’re excited to see what else is uncovered.”

Members of the Cogstone paleontology team, which includes 11 experts who monitor all excavation at the station sites, are also excited. Crews digging for Metro are approximately 50 feet toward reaching the final depth of approximately 80 feet at the Wilshire/La Cienega subway station, and more fossils are likely still to be unearthed, Leger said. Excavation will begin over the next couple years at additional subway stations at Wilshire/Rodeo in Beverly Hills and near Avenue of the Stars in Century City, and who knows what will be found, she added.

Olympic challenge ahead for Ron Tutor