Wilshire Division detectives are no longer investigating a case in which bloody symbols were scrawled on a bench in Pan Pacific Park as a hate incident after authorities determined the symbols resembling swastikas were actually Hindu symbols. 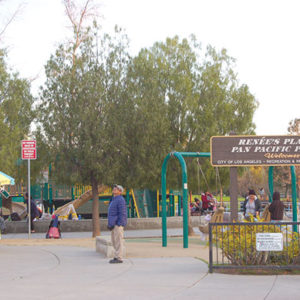 A large amount of blood and bloody graffiti was found near the playground and recreation center at Pan Pacific Park in early March. (photo by Edwin Folven)

The incident drew widespread attention on March 4 after park employees found a large amount of blood in and around a restroom near the park’s recreation center, and the symbols marked on a concrete bench near the playground. Because the symbols were initially believed to be swastikas, which they closely resemble, and there was a large amount of blood found, the LAPD launched an extensive investigation that involved using a blood hound to follow a scent and blood trail leading away from the area. The dog followed the trail south through the park and east on Third until the it went cold.

Nobody linked to the incident was found. The symbols were quickly cleaned up after being documented by authorities.

Senior Lead Officer Perry Jones said park staff later told investigators about a homeless man with a serious foot injury who had frequented the park in the days before the blood was found, and he is likely the person who scrawled the symbols. He added that a woman of Indian descent who lives nearby and saw the symbols told police they were Hindu in origin. Writing associated with Hinduism was also found nearby, he added.

Police are still uncertain about the individual’s identity and vandalism charges could be filed if they are found. Wilshire Division Det. Ozzie Delgadillo added that investigators are determined to get to get to the bottom of the situation.

“It’s quite unusual to find a substantial amount of blood in a bathroom and that’s why we got the blood hounds,” Delgadillo added. “If anyone out there knows anything about it, we would like them to call us.”

Anyone with information is urged to call Wilshire Division detectives at (213)922-8205.

Man comes down from crane after more than three hours