Authorities are searching for a transient who allegedly raped a woman on March 14 in a subway station in east Hollywood. 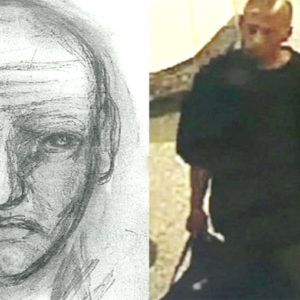 Authorities have released a sketch and security camera photograph of the suspect wanted for allegedly raping a woman at the Vermont/Sunset subway station. (photo courtesy of the LAPD)

Transit riders called 911 at approximately 6 p.m. and police rushed to the underground platform at the Vermont/Sunset Red Line subway station, but the suspect had already fled. The man allegedly grabbed the victim after she asked him for directions, said Det. Sid Rodriguez, with the LAPD’s Northeast Division. The suspect allegedly forced the victim into the stairwell of an emergency exit and strangled, punched and raped her.

“I can’t give out too much because we are still looking for him,” Rodriguez said. “Like anything, we want people to be vigilant and aware of their surroundings.”

Rodriguez described it as a crime of opportunity as opposed to the suspect targeting a victim. He said security cameras captured images of the suspect in the subway station and a police sketch was made. Additional security patrols were implemented in and around transit stations.

The suspect was described as black, approximately 5 feet 7 inches to 5 feet 10 inches tall, 165 to 180 pounds with a shaved head and a 2- to 3-inch scar on his left forearm. He was wearing black clothing and had an earring on his right earlobe.

During their investigation, detectives learned that the suspect frequents Metro stations in Compton and Santa Monica.

Construction is out of control in Hollywood