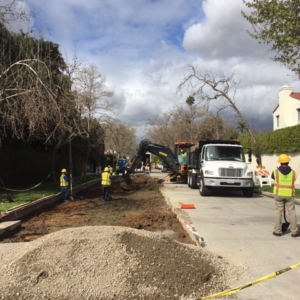 City crews have recently been repairing concrete streets in Hancock Park, with the first phase of work scheduled to be complete by June. (photo courtesy of the Hancock Park Homeowners Association)

In January, the Hancock Park Streets Committee began working with Hagekhalil and the 4th Council District Office to develop a long-term plan for repairing concrete streets, and an immediate repair plan for uneven streets and potholes. Hagekhalil first had a team conduct a complete assessment of all streets in Hancock Park. Next, a list of potentially hazardous areas was created where work could begin immediately.

The first areas to be addressed are near Second Street and McCadden Place, Fourth Street and Rimpau Boulevard, June and Fourth streets, and the 300 block of South Las Palmas Avenue. The work began last week at Second Street and McCadden Place, where crews removed an uneven asphalt patch and replaced it with concrete.  The Streets LA crew will return to Hancock Park every two weeks and plans call for of the first phase of street repairs to be complete by June.

The Hancock Park Streets Committee will continue to identify and develop street repair priority list with the city. Additionally, plans call for more city money to be budgeted for concrete repairs during the next fiscal year, which begins in July. The association hopes to have funds secured for two dedicated concrete crews that can respond faster when concrete street replacement and repairs are needed. The city is also investigating the use of a new slurry replacement for asphalt which may be better, and cooler for the environment. The material could be possibly be used as a temporary fix for pot holes prior to final concrete replacement.