SLS Hotel event celebrates those who give the Gift of Life

On a 2004 trip to Israel, Beverly Hills resident Abraham Zilkha had his cheek swabbed to see if he would be a match for someone in need of a transplant of bone marrow or peripheral blood stem cells, which can help replenish marrow and create new blood cells. 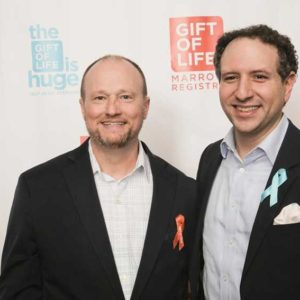 Over the next 10 years, Zilkha was contacted once by the Gift of Life Marrow Registry about being a potential match for someone in need of a transplant, but the ensuing blood work showed he wouldn’t be a good fit.

But in 2014, Zilkha got another call, and this time, he was given a chance to help.

Without knowing anything about the recipient except that he was a 40-something man with leukemia, Zilkha traveled to Virginia and donated peripheral stem cells in 2014, then donated again last year in New Jersey.

“I did what anyone else would do if you were asked, ‘Would you want to save someone’s life?’ I said yes,” Zilkha said.

By law, donors and recipients are kept private for a year after donating, and even if matches want to communicate, they must write letters that go through Gift of Life and the patients’ hospital.

But with the donor and recipient agreeing to meet, the time-consuming process of unveiling each other’s identities finally reached an end March 7 when the Gift of Life Marrow Registry connected Zilkha and his recipient, Scott Gray, at the nonprofit’s Celebrating Life event at the SLS Hotel in Beverly Hills.

Zilkha, 37, said the meeting put an end to a long time of wondering about who was on the other end of the transplants.

“I thought about him a lot during those five years. I knew he had a family and how hard that must have been to go through,” Zilkha said.

Gray, a 49-year-old retired master gunnery sergeant of the Marine Corps and resident of Jacksonville, N.C., said he’d also wondered about who was donating the stem cells. Gray, who needed the transplant after being treated for acute lymphoblastic leukemia, a cancer of the blood and bone marrow, said it was a “great experience” to be able to show his gratitude to Zilkha face-to-face.

“We both have our own families and thanks to him not only for myself, but my wife, my children, my grandchildren,” Gray said. “There’s a conglomerate of people you affect when you donate. It’s not just one person.”

Gray, whose leukemia is in remission, said he still feels good six months after his most recent stem cell transplant and has a “positive outlook” about his future.

“Anything other than being positive isn’t good, and I don’t want to live that way,” he said.

Marti Freund, director of community engagement for Gift of Life Marrow Registry, said having the two men share such a special moment is the best possible outcome for the approximately 160 transplants the nonprofit facilitates each year.

“It’s what our organization works for every day, to see moments like the one that happened [March 7]. Our sole purpose is to be able to save more lives and the purest and truest form of what we do is having two people meet like they did,” she said.

Zilkha and Gray exchanged contact information and friended each other on Facebook so they can stay in touch.

“We have a unique bond and I think that bond has the potential to be very strong and the seeds of a great friendship,” Zilkha said. “I’m looking forward to watching him celebrate birthdays and family events.”

Gray said he hopes more people join the registry like Zilkha so those in need of a donation can share moments with their families.

“You affect quite a few people in donating, and I don’t think that people realize that when they volunteer to donate at first,” Gray said.

Zilkha agreed and said it’s something everybody can do to help someone else.

“It’s not a big tax on your life, and you could literally save someone’s life when you’re possibly the only one who could,” Zilkha said.

My daughter at 23, had gotten chronic Myeloid leukemia. She has a husband and four children. The kids grammy took care of them, and I took care of my daughter. They sent her home and She started taking Gleevic. 9 months later she was in remision. It was great news. We were all happy. She went back to work and was doing real good, Then she started feeling really bad about 4 months later. Her body was rejecting the Gleevic. She went for another bone marrow biopsy, and it showed she had ALL, Doc said she would have 3 months to live. He offered her treatment of several different kinds of chemo, a treatment plan. She and I lived in the local hospital for 11 months. She went in remission. And they tested her siblings 2 brothers they were not a match. So they finally found a stemcell match. We didnt know where the stemcell came from just that it was gonna save her life. There was a whole lot i didnt understand i was lost and confused. I finally joined a support group, they helped me trumendously. As well as Be The Match. It was really hard as a caregiver. But we made it through she is 2 1/2 years out.