Robberies have people on edge in Melrose District

Recent street robberies in the Melrose District have prompted police to increase patrols and authorities to warn residents and visitors to be vigilant while walking and not flaunt expensive jewelry, shoes, handbags and other items that may attract criminals. 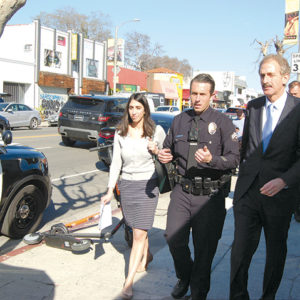 “I’m acutely aware of this disturbing spate of robberies, sometimes with use of force here,” Feuer said. “I always look at issues from the standpoint of, if I lived in the neighborhood, what would I expect. Last year to date, there were four robberies. This year to date there have been 13. That’s a significant increase that deserves attention. We’re well situated to help because the team of our office and LAPD can both bring basic suppression tools to the table by increasing police presence and working to prevent people from being victimized in the first place. Nooshi is going to continue to be active in community meetings making clear the very basic information that could prevent them from becoming a victim.”

Those tips include not wearing expensive jewelry or conspicuously displaying recently purchased goods, not walking alone and staying attentive to surroundings.

“This is both a time for us to be extremely sensitive because there is a legitimate concern for safety that has arisen in this neighborhood and to take advantage of this moment to deepen our collaboration so we can prevent crime in the future,” Feuer said.

Concerns about public safety in the Melrose District were heightened by a March 4 robbery in the 7400 block of Waring Avenue in which four suspects followed a victim from a nearby pharmacy and attacked him shortly after 4 p.m. The suspects are believed to have targeted the man for his Rolex watch. Security camera video shows the suspects following the victim, knocking him to the ground and striking him multiple times A good Samaritan pulled over and attempted to help. The suspects fled and are still being sought by police.

The victim, a tourist staying at an Airbnb rental in the neighborhood, suffered injuries to his face but did not require hospitalization. Det. Bernard Romero, with the Wilshire Division, said it appears the group of four suspects wearing hooded sweatshirts were looking for potential victims. The suspects in the Waring Avenue robbery were black men approximately 18 to 25 years old. Anyone with information is urged to call (213)933-8205.

Senior Lead Officer Ian O’Brien said extra patrols have been assigned to the Melrose area and officers are meeting with business and residential property owners to raise awareness about crime prevention.

“It’s about being aware and walking in groups,” O’Brien said. “I am trying to get out to meetings with the public and we are showing a police presence up there.”

Peter Nichols, founder of the Melrose Action Neighborhood Watch, said more needs to be done to prevent and solve crime.

“To see how calculated these four young men were, the callousness of this and the brutality of this being in broad daylight, people are deeply shocked and they are angry,” Nichols said. “People don’t understand why the city isn’t allocating more resources to public safety.”

‘Captain Marvel’s’ success is a righteous indictment of sexist trolls

airbnb is also terrorizing our neighborhoods